From the RuneScape Wiki, the wiki for all things RuneScape
Jump to: navigation, search
The RuneScape Classic Wiki also has an article on: classicrsw:Edgeville Mausoleum 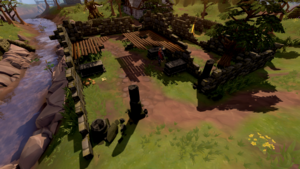 The Edgeville Monastery has been worn down over the ages.
The location of the mausoleum.

It is possible the mausoleum was destroyed in the early Third Age, when Zamorakians and Saradominists joined forces to eradicate all evidence of Zaros's existence on Gielinor.

The Edgeville Mausoleum serves contains an entrance to the Edgeville Dungeon and some yew trees, found in the garden on the left side of the building. The portal to Soul Wars is located inside the ruins. There is also a lever here that can teleport players to the Deserted Keep in the Wilderness, much like East Ardougne's lever. However, if you use the lever at the Keep to teleport back, you will end up at the East Ardougne lever.