From the RuneScape Wiki, the wiki for all things RuneScape
Jump to: navigation, search
Hellfire bow? (edit)

The hellfire bow is a powerful bow in the Wilderness that can be wielded by players with a Ranged level of 90 or higher and does not require ammo. Despite requiring 90 Ranged in order to wield, the bow possesses the stats of a tier 99 weapon, essentially making it the most powerful weapon outside Daemonheim.

While on the ground, the bow will emit a tier 4 loot beam, which is unaffected by loot beam settings. The bow is found in one of multiple random places in the Wilderness, based on that from Wilderness elite compass clues. [1]. However, if someone else has picked up the bow, they may move it to other locations, which can make it tedious to find.

Whilst in the Wilderness, players can operate any of the Wilderness swords to locate the bow. Unlike the WildyWyrm tracking function, the sword only tracks the hellfire bow's general location of the area - north and south east/west, such as The sword pulls towards the north-east area of the Wilderness! (The northern Wilderness is considered to be level 25 and higher)

When a player is holding the bow, using the locate function will only say that a player has the bow. In addition, a message will periodically be broadcasted to players on the same world who are also in the Wilderness. For instance, the following message could be a broadcast: Player has the Hellfire bow in level 47 north-east Wilderness! A red marker is also shown under the player carrying the bow. The person carrying it sees the message: Carrying the Hellfire bow has informed other players of your current Wilderness level!

As well as alerting all players who are on the same world and in the Wilderness to the player's general location (although this generally does little due to various points of interest in the level area), carrying the bow will also override level and combat restriction, so a player wielding the bow can be attacked by players of any other level, and also by numerous players, even in a single-way area. This makes the bow extremely dangerous to wield.

If the player leaves the Wilderness by any means, such as logging out, teleporting or dying, then the bow disappears from the player's equipment tab/inventory and is moved to one of the pre-placed spawn points. It cannot be keepsaked. Imp-in-a-box and the pack yak's winter storage scroll would refuse to bank it, and Telekinetic Grab cannot be cast on it.

The hellfire bow seen on the ground 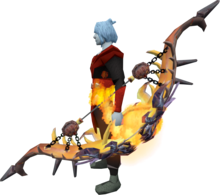 Logging out or entering the lobby will force the player to drop the bow. Leaving the Wilderness makes the bow appear in one of the following locations.

Note that players may also drop the bow, so it can also be found in other locations.

The locations are exactly the points where a compass clue pointing to Wilderness might lead.