From the RuneScape Wiki, the wiki for all things RuneScape
Jump to navigation Jump to search
"Ardougne pub" redirects here. For the other pub in Ardougne, see Flying Horse Inn.

'She'll serve you a drink as quick as a shot!'

Marion the barmaid used to lead a group of merry bandits, but now she is content to stand behind the bar and polish her numerous archery trophies, in between serving drinks to thirsty travellers. She doesn't just live off past glories, though - she's come up with a recipe for a new ale called Ranger's Aid, which really hits the spot. Her bow (Maiden's Sight) can be found mounted on the eastern wall of the pub.

Geoff sits by the dartboard fletching arrows, which he tests by flinging at the board. On occasion when Sparky is on the mat in front of the board Geoff will miss and the arrow will land at his feet, resulting in Sparky chattering.

He once tried to join the Ranging Guild, but failed his entry test due to an unfortunate and highly implausible accident involving a swallow, and ending up with an impaled squirrel. He's since taken in the squirrel, Sparky, and looks after him.

'With his arrow crutch, Sparky's nut thievery days are sadly over.'

Sparky's leg has never been the same since Geoff accidentally injured him, but Geoff promised to look after him and has even given him a specially fletched arrow to use as a crutch, inscribed with "Get well soon". He's still managed to keep his demeanour perky, his outlook positive and his tail bushy. To talk to the squirrel, players must have 70 Summoning, or higher.

If you ask Sparky about his hat he will give you directions to where you can get your own. However, should you take the time to follow these directions, they will lead you to the Grand Exchange.

Sparky is the combat pet for the Ranged skill. When obtained and redeemed, he will disappear from the bar, travelling with the player instead. 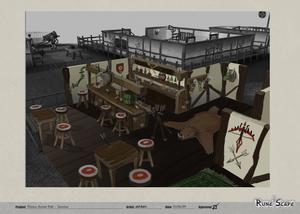