The Wilderness Agility Course (labelled on the world map as "Agility Training Area") requires level 52 Agility to enter. However, if you have 47 Agility, you will be able to enter the course by using a summer pie. For the first obstacle, players need 49 Agility, thus making it a requirement for those using boosts to constantly eat summer pies, so that your Agility level will not drop below 49. The course is divided into two parts: the walkway (often called "the edge") and the main course. Players who are entering the main course must balance along the walkway, giving 15 experience.

The entrance to the Wilderness Agility Course

The Wilderness sword 4 provides unlimited teleports to the course after the Wilderness achievements have been completed.

Players can use teleports from Ancient Magicks (Ghorrock Teleport with 96 Magic) or Lunar Spells (Ice Plateau Teleport with 89 magic) to teleport themselves due west of the course.

Players who do not have the Magic level to cast the spells above can pull the Ardougne or Edgeville teleport lever, run north to an unavoidable spider web, head west to the north side of the Mage Arena, and then continue to the south-west, past the giant bats.

Once at the agility course, the player must walk up the walkway at the south side of the course to enter. You will only fail mid-way; getting past will result in you passing the obstacle. If you fail, you will fall on one side which is a pit filled with aggressive white wolves. The pit on the east side seems to be the most common side when the player fails to climb up to the arena.

This course is dangerous and players are susceptible to the Wilderness threat system the longer they stay. If choosing to use a demonic skull, the player can be attacked by player killers while training at it. In that case, players may choose a world with a low population of players or a world with lots of other players training Agility, to reduce their chance of being targeted by a player killer. Players can also avoid attack by switching worlds if they see a PKer approaching. The best location to recognise PKers before they enter the course is near the entrance of the obstacle pipe. Here you can see player killers approaching from the east. Player killers may be identified if they have combat gear equipped, though equipment may be unequipped (overrides do not work with PvP enabled), or if they have a combat familiar such as a pack yak or unicorn stallion summoned. Turn your Private Chat to "Friends" or "Off" to prevent player killers from using your online status to follow you from one world to another.

Players with PvP enabled may wish to bring along a cheap and effective player killing weapon to defend themselves. Another viable strategy is to bring a blisterwood staff and some air and nature runes, and provided you are on the default spellbook, you will have some casts of Snare and the best air spell you can cast, which should help you defend against melee PKers. Antipoison potions may also be helpful. 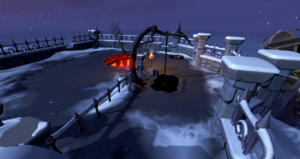 The northern part of the course

With at least level 52 Agility, players may use a Demonic skull to gain a scaling increase in the amount of Agility experience gained from the course. Players can gain another 5% additional experience on their lap bonus if they have a Wilderness sword 2 or better equipped or in their inventory. The demonic skull does not stack with Brawling gloves (Agility). If both are equipped you will just gain the bonus from the demonic skull. 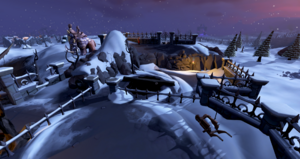 The last section of the course

The experience per hour is based on a lap time of 44 seconds with no failures, including time taken to run back to first obstacle. The Wilderness sword 2 or better lap bonus is not included since it is negligible in comparison to the demonic skull bonus (less than 5,000 bonus experience gained per hour from the wilderness sword bonus). 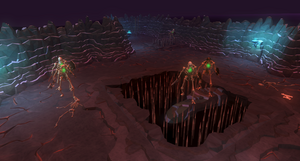 A player crossing the stepping stones

The table below lists all the obstacles that give experience. Note that there is no experience bonus upon completing the course if the player forgets to retry an obstacle after failing it, or completes an obstacle on the course out of order.

It is possible to fall on the ropeswing and log. If the players fail these obstacles, they will be placed in a small dungeon, with 4 bones spawns and eight aggressive skeletons. The ladder to escape is in the north-eastern part of this dungeon. The stepping stones can be failed as well, but failing these will only send players to the side of the ladder, deducting 26.6% (rounded down) of players' remaining life points at the same time.

Everytime you complete a lap, there is a low chance that the talent scout (near the obstacle pipe) will call you. You will then be sent to The Pit where you get the chance to complete a minigame (D&D). After you complete it, you can gamble your reward xp.

Note: If you do not talk to the talent scout after he called you, you might not get the chance to play the minigames. If you happen to fall into the lava pit while the abyssal whip is equipped there is a chance that it will start acting weird and extend itself while performing its own animation.