From the RuneScape Wiki, the wiki for all things RuneScape
Jump to navigation Jump to search
"soe" redirects here. For the Treasure Trails reward, see sack of effigies.
For the cosmetic override, see Sword of Edicts (override).
Sword of Edicts? (edit)? (edit) 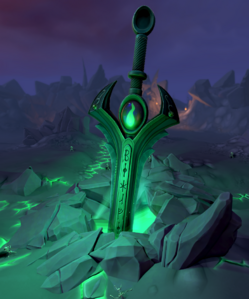 The Sword of Edicts, also known as the Sword of Guthix, is an immense blade located in the middle of the Wilderness Crater. It was used by Guthix at the end of the Gielinorian God Wars to create the Edicts of Guthix, which banished major gods from Gielinor and established a period of peace, during which no god could directly interfere with Gielinor's affairs. It was added to the game on 13 December 2011 with a graphical overhaul of the entire Wilderness; its significance was expanded with the release of The Origins of Gielinor video on 28 February 2013.

At the height of the Gielinorian God Wars, Zamorak used the Stone of Jas to destroy nearly the entire region of Forinthry, transforming it into the modern Wilderness. The destruction was so horrific that the world itself cried out, awakening Guthix from his ages-long slumber beneath the surface. Guthix looked upon Gielinor as it had been ravaged by the God Wars, and became furious. He plunged the Sword of Edicts into the heart of Forinthry, enacting the Edicts of Guthix, a set of laws designed to keep the people of Gielinor free of direct interference from gods. In doing so, Guthix cast from Gielinor Armadyl, Bandos, Saradomin, and Zamorak, the four gods most responsible for the God Wars and the destruction the world had suffered. Other major gods, who played little to no role in the war, were also forced to leave, but a few others were allowed to stay.

Guthix took the Stone of Jas, the most powerful of the Elder Artefacts, and hid it deep underground in an ancient temple, where it would be guarded by an elemental of balance. Before returning to sleep once more, Guthix looked upon Gielinor, savaged and war-torn, and he wept. Finally, Guthix returned to slumber beneath the earth, and the Fourth Age of Gielinor's history began.

After Guthix's death at the hands of the Mahjarrat Sliske in year 169 of the Fifth Age, the Edicts ceased to be, but the Sword remained entrenched in the Wilderness, a permanent reminder of Guthix's power.

Sometime after Guthix's death, a cursed wisp colony formed around the Sword of Edicts, warped by the taint of the Wilderness. However, such influence allowed skilled diviners to transmute the energy into that of their liking.