The Dark Warriors' Fortress, formerly called the Dark Knight Fortress, is a castle in levels 19, 20, and 21 of the Wilderness. North of Falador, it is populated with level 24 dark warriors. Although this place can be good for training melee and magic, it is a popular player killing place. 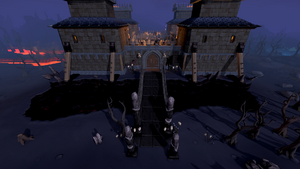 The entrance to the castle. 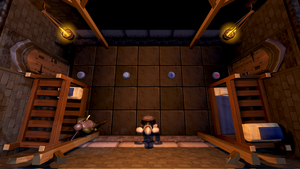 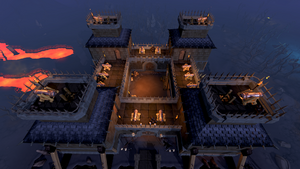 The fortress from above.

This floor has several rooms, and is crowded with dark warriors. The northernmost room contains respawns of 5 earth, water, air and fire runes. The room directly west of this contains 5 chaos, mind and body runes. Players should be wary when approaching this area: Although this a good place for a rune spawn, player killers may attack and very possibly kill other players who are around their combat level. In the centre of this floor is a courtyard containing, amongst other things, a crate which is sometimes led to in treasure trails. One room's ladder is broken, making it impossible to climb up it. This is inconvenient if a player attacks, because you will have to run to the other room (probably opening a few doors) and climb up that ladder.

For those who have received Jennica's ring from the Summer quests, there is a portal in the centre of the castle, in front of the dead body. There is a tormented wraith, Level 60, on the other side, though, so one should be moderately cautious about using the portal. One receives 15,000 Defence experience if their level is at least 80 when entering the portal the first time (If you didn't have the level requirements when entering you can return when you do for the experience). Also, wearing an amulet of ghostspeak will allow one to understand the wraith's speech.

You can achieve tolerance with the dark warriors after about 20 minutes whether you fight with them or not.

In the room with the 5 Chaos, Mind and Body runes if you position yourself correctly using the Broken ladder you can be safe from the dark warrior inside the room.

The 1st floor[UK]2nd floor[US] is the top level of the castle walls. It contains nothing of interest beyond more dark warriors. Players looking to collect rune spawns on the ground floor[UK]1st floor[US] can climb up the ladder in the south-western room and climb down the broken ladder in the north-western room in order to save a little bit of time coming in, since there's a wall blocking access to the chaos runes from the entrance that would otherwise require walking all the way around the castle. The broken ladder does not allow access from the chaos rune spawn room to the upper floor. It is only a one way ladder and may only be climbed from above.