From the RuneScape Wiki, the wiki for all things RuneScape
Jump to navigation Jump to search
Not to be confused with Spirit Plane or Shadow Realm.

Not to be confused with the Spirit Realm of Aminishi, part of the Arc region.

The Spirit Realm is a different plane, parallel to the Wilderness. It is accessible during and after completing the Spirit of Summer quest. It can be entered by standing on a spiritual portal, and selecting operate while wearing Jennica's ring. After the Summer's End quest, the weak portals will become available to travel through. The area was released on 19 July 2008.

Two portals are available during the quest Spirit of Summer, and the reward item from the quest, Jennica's ring, activates additional portals after the completion of Summer's End. The first portal is used at the beginning of the Spirit of Summer quest. It is in the entrance of a house in the Ruins (east). Experience is only given after Summer's End. Refer to the 'Weak portals' section for this.

There are also five weak portals that can be activated using the upgraded version of Jennica's ring received after completing Summer's End:

Due to this fact, it is possible that when the player killed the Spirit Beast in the Spirit Realm, the player released the opposite into the real world, the Corporeal Beast.

Non-player characters and monsters in the real realm cannot be seen in the Spirit Realm, therefore the portal can be used as an easy escape when hunted by PKers or monsters. Note: You cannot enter the Spirit Realm when teleblocked or in combat! 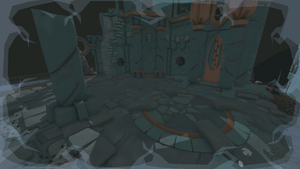