The Edgeville Monastery is a two-storey building north-east of Falador, south-east of the Black Knights' Fortress and west of Edgeville. Five monks wander inside, both in the courtyard and inside the building.

The Edgeville Monastery's exact age is unknown, although its history suggests that it pre-dates many human settlements in Asgarnia and Misthalin. According to the novel Betrayal at Falador, the Edgeville Monastery was originally a military camp created by an ancient king who sought to lead a crusade into the Wilderness. The king, however, passed away before he could begin his cleansing of the Wilderness, and the camp he left behind gradually developed into a permanent monastic settlement.

In 164, the Edgeville Monastery was attacked by the Kinshra Lord Sulla, who had recently slain his predecessor and gained control of the organisation. The Battle of the Monastery was the first battle of the War of 164, and it saw the first use of Chaos Dwarf Mortars developed by the Zamorakian extremist Thorbarkin. The Edgeville Monastery's residents suffered heavy casualties in the battle, but the intervention of more well-equipped fighters such as Kara-Meir, Doric, Squire Theodore, Ebenezer, Castimir, and Gar'rth gave much of the order time to escape with Abbot Langely to the then-unincorporated city of Edgeville in Misthalin. The battle left the Monastery heavily damaged, but following the war it was rebuilt.

According to the novel, the Edgeville Monastery contains a library that includes extensive records concerning local history and guests. These records were partially damaged in Sulla's invasion, but most survived. The library itself does not appear in-game.

In the first year of the Sixth Age, Fathers Hackett and McGruder were kidnapped by a Kinshra party and later killed in the Tomb of the Fallen, after having been starved.

The ground floor[UK]1st floor[US] of the Edgeville Monastery contains various decorations, benches, fountains, and a garden to the north with cabbages and rose bushes. It is also home to several monks who can heal players upon request, including Abbot Langley, who ensures only players with level 31 Prayer can climb up to the 1st floor[UK]2nd floor[US]. Monks and Abbot Langley both heal the player by about 20% of their maximum life points.

There is a Musician just outside the Edgeville Monastery, useful for recharging run energy and as another method for healing life points.

Players should not try to pick up the Kharid Scorpion as doing so will cause them to take 30 unblockable damage. The only way to get the scorpion is by using a scorpion cage on it during Scorpion Catcher.

Brother Jered can bless unblessed symbols into holy symbols. He can sell members with 99 Prayer the Prayer cape for 99,000 coins. In addition, he can make Blessed spirit shields if the player brings him a normal Spirit shield and a holy elixir.

Praying at the altar fully recharges a player's prayer points, in addition to giving a +20 bonus over the player's max prayer points. This +20 boost makes it the best altar available to free players and will work even for players with full normal Prayer points. This has no effect on their Prayer level.

There are barrels filled with wine, multiple beds, stained glass windows, and tables for the monks to place items upon, though these are only for decoration.

For members, the poison-purging Prayer book can be found here during The Great Brain Robbery, and it can also be reobtained here if lost.

There are some quests that involve the Edgeville Monastery: 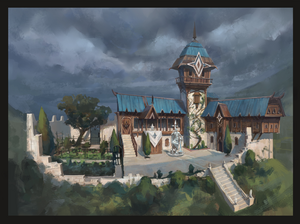 Concept art of the monastery