From the RuneScape Wiki, the wiki for all things RuneScape
Jump to navigation Jump to search
The Old School RuneScape Wiki also has an article on: osrsw:Doris

Doris Karloff is Evil Dave's mother. She can be found in her house in Edgeville, just west of the bank. She claims to have lived in Lumbridge in the past but moved due to the lack of guards and the large numbers of pickpockets and people killing the citizens there.

She is a witness in her son's court case, EVIL DAVE v. The People. 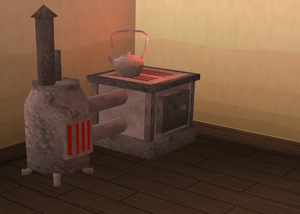 The stove in her house is a useful cooking spot because it is a short walk from the Grand Exchange (through the shortcut), doesn't require any skill levels or quests and will decrease burning opposed to a fire. The stove is also next to the Edgeville bank. Note that the stove can be selected through the roof of the house or the graphics can be set to cut off the roof.

Below Doris's house is her basement which her son has taken as his own. It houses both the basement-dweller Dave and a large swarm of hell-rats.