The Death list is a notice board which can be found in two places just south of the Wilderness wall. It displays the recent player kills in the Wilderness, showing the name of the killer and the defeated, as well as their combat levels. At Edgeville it is located 2 squares west of the bridge to the Grand Exchange. Near Varrock it is located north-west of the Jolly Boar Inn, on a path that leads straight into the Wilderness. 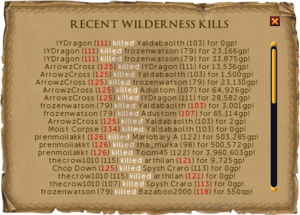 Players may evaluate the risk on entering the Wilderness by observing how quickly new kills are add onto the list. They could also see if any of the player killers at large have a combat level close enough to attack them.

Reading the Death list in Edgeville is one of the requirements for the Easy Wilderness Tasks.

This information has been compiled as part of the update history project. Some updates may not be included - see here for how to help out!
Retrieved from ‘https://runescape.wiki/w/Death_list?oldid=35855207’
Categories:
Hidden categories: