Eagles' Peak is a small mountain in northern Kandarin, overlooking the Piscatoris Hunter area that stretches north to the Lunar Sea. The mountain is named after the massive eagles that inhabit it. It is most well known for being the hub of the eagle transport system. It also is the primary location of the Eagles' Peak quest.

Eagles' Peak is a relatively small mountain, although some consider it to be an extension of the impassable mountain range known as Arandar that divides Kandarin and the elven lands of Tirannwn. Found in northern Kandarin, it marks the southern border of the Piscatoris Woodland, a largely uninhabited forest found west of the Tree Gnome Stronghold. The entrance to the path that leads to the peak is in the southeast corner of the mountainous area labelled Eagles' Peak on the World Map.

Because it is fairly far from any civilisation but the gnomes', Eagles' Peak has long been a popular destination for naturalists and researchers. At the same time, though, the subterranean caves that sprawl beneath it have made it the home of thieves and others fleeing the law of Kandarin.

The unknown regions bordering the southern and western borders of the mountain have yet to be explored, making them inaccessible. The mountain is surrounded by thick underbrush and rough terrain, making reaching it from any side difficult. The mountain's only reliable path begins on its east side, near the Tree Gnome Stronghold. An agility shortcut on the northern side, though, will lead directly to the mountain's peak, saving time for those attempting to reach it from the north. This requires 25 agility. 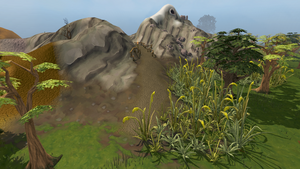 The path leading up Eagles' Peak

The woodland surrounding Eagles' Peak is crowded with standard trees and oaks. Most desirable to those training woodcutting, though, are the many yew trees that border the undergrowth on the north and eastern sides.

Those that have completed Swan Song can deposit any cut logs in the bank far to the north, in the Piscatoris Fishing Colony. By speaking to Kathy Corkat, the boatwoman near the stream to the east, players can travel to the Colony's entrance free of charge. A Summoning obelisk can also be found near the Colony for those using summoning familiars to aid while woodcutting.

The closest bank for those not finished with Swan Song is in the southern Tree Gnome Stronghold. The walk to the bank is somewhat long, though, making this method far less popular than the one stated above. 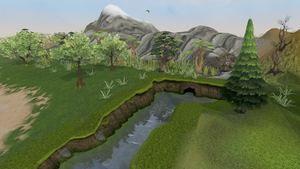 The Piscatoris Woodland to the north is brimming with targets that avid hunters can capture, ranging from ruby harvest butterflies to Prickly Kebbits. Eagles' Peak itself, though, hosts several hunter targets that cannot be found anywhere else in the area.

Just north-west of the mountain are a number of wild ferrets, which can be caught using a box trap. These, in turn, can be used alongside a rabbit snare to capture rabbits, which dwell in holes throughout the forest. To capture either of these, though, players must complete the Eagles' Peak quest.

Within Eagles' Peak is a small tunnel system, which until recently was inhabited by a number of rogues fleeing the law of Kandarin. Though they have since disappeared, the remains of their camp can still be found scattered throughout the cave.

Those that have completed the Eagles' Peak quest can use the eagle transport system here by lassoing giant eagles with a rope. These eagles can be used to fly to other destinations, including the Uzer, Feldip, and Rellekka Hunter areas, as well as the Jade vine maze in southern Karamja for those that have completed Back to my Roots quest. The lairs in which the other eagles nest must first be cleared from the outside before players can use them.

This information has been compiled as part of the update history project. Some updates may not be included - see here for how to help out!
Retrieved from ‘https://runescape.wiki/w/Eagles%27_Peak_(location)?oldid=35702850’
Categories:
Hidden categories: