From the RuneScape Wiki, the wiki for all things RuneScape
Jump to navigation Jump to search
The Old School RuneScape Wiki also has an article on: osrsw:Arandar

Arandar is a mountain pass leading to Tirannwn that may be used by players upon completion of the Regicide quest. Players may use the pass to access the elven lands without having to travel through the Underground Pass again. The gate leads to the forest south of the Piscatoris Fishing Colony, the World Gate and the Tree Gnome Stronghold. It was built by the Cadarn Clan as part of the Break Out.

Aside from the shortcut from Ourania to Lletya made accessible after The Prisoner of Glouphrie, Arandar is the only known method of crossing the impassable mountain terrain that borders Kandarin without using the Underground Pass, which was recently conquered by the Zamorakian Iban. 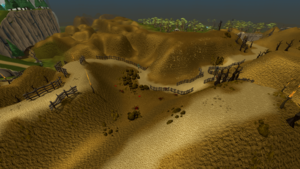 Arandar's terrain is twisting and uneven, making it difficult to navigate.

If players have started Mourning's End Part I, making use of a crystal teleport seed to reach the elven lands will be faster than walking through Isafdar. There are several Agility shortcuts that will make the pass easier to cross, requiring Agility levels of 85, 68, and 59. Two easy Tirannwn achievements are completed here: entering the gates in only mourner gear, and mining limestone at the Arandar mining site.

The pass itself is somewhat dangerous to unprepared adventurers. There are several aggressive dire wolves and deadly red spiders crawling about it, although these should not usually be a problem for those strong enough to have completed Regicide. There are also several level 114, level 120, and level 124 elves (mourners prior to Plague's End) marching to the gate from the south. While they are not aggressive, they will throw a vial at players if attacked, which lowers all combat stats and Constitution down to 20 temporarily. They are used in the Mourning's End Part I quest and are fortunately not a threat. In RuneScape Classic, Arandar was a part of the 'Impassable Mountain Terrain' and was impossible to cross.

Several red spiders' eggs spawn near the spiders. They can be collected by players, but because Arandar is quite a distance from a bank, travelling elsewhere to collect the eggs may be more effective.

The goblins near the entrance to Arandar have white goblin mail, so are presumably part of the Saragorgak tribe, or "Footsoldiers of the Holy Wrath," which was the tribe Bandos sold to Saradomin in the God Wars.

This information has been compiled as part of the update history project. Some updates may not be included - see here for how to help out!
Retrieved from ‘https://runescape.wiki/w/Arandar?oldid=35702786’
Categories:
Hidden categories: