Ice Mountain is located just north-west of Gunnarsgrun, and the main entrance to the Dwarven Mine is located on its lower southern slope. It dominates northern Asgarnia, and is Asgarnia's only remaining region in which it snows year-round.

Beneath the surface, Ice Mountain is filled with a massive underground network that stretches far beyond the mountain's edges. Both the dwarves of Keldagrim and Imcando dwarves have connected the mountain to the Dwarven Realm, leading to the establishment of subterranean Dwarven Mines, Camdozaal, and the Ice Mountain Dwarven Colony. The Kinshra formerly used the area as a slave mine, although today their only subterranean work on the mountain is in the Black Knights' Catacombs. Even further down is a complex river system where the Living Rock Caverns can be found.

The view from the south end of Ice Mountain.

Players can walk there fairly easily from Falador (go north and north-east) and from the region of the Barbarian Village and Edgeville (go west). Other transport routes to the mountain include: 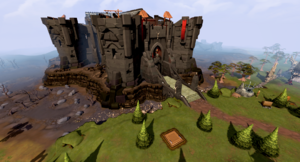 A view of the Black Knights' Fortress, found to the north of Ice Mountain.

The mountain is accessible from its eastern side, from the ramp marked by two standing torches. Once on the mountain, you may roam freely. From the top of the ramp, go:

The mountain is dotted with dead trees. The northern peak has a White tree, which is featured in the Garden of Tranquillity quest, and the Oracle, who is involved some quests (particularly Dragon Slayer and Perils of Ice Mountain) and some Treasure trail clues. The Oracle has tattered clothing, and she is white from staying in the cold so long. When talked to, she gives random pieces of advice and RuneScape versions of old sayings. Icefiends roam the mountaintop and are good training monsters for players level 17-30.

In the Second Age the mountain was the site of Lassar, a vast fortress of Zaros. This fortress was destroyed and left no known ruins behind.

During the Third Age, Asgarnia as a whole was much colder than in the modern Fifth Age, and much of it saw year-round snow. Ice Mountain was far less hospitable than it is today, and wyverns dominated much of its territory.

Camdozaal, amongst other small halls, was established by the Imcando dwarves during the late Third Age or early Fourth Age. The mountain hall became a centre of Imcando and standard dwarven society, and in roughly 700 of the Fourth Age became closely tied to Avarrocka in its battle with Zemouregal. It also managed to remain at relative peace with the goblin tribes to the west, including the Garagorshuun and Thorobshuun.

Camdozaal was destroyed by magic-fearing barbarians during the Great Invasion between 42 and 62. The ruins of the hall and its Sacred Forge were recently discovered in the Defender of Varrock quest. There are currently two rubble-filled tunnels near the forge.

In the modern Fifth Age the area became much more developed by dwarven settlers from Keldagrim and other points in the Dwarven Realm. In 164, the dwarves were pulled into the War of 164 and ultimately became united with Asgarnia. During the war, virtually all of northern Asgarnia's independent farmers were forced to abandon their farms as Lord Sulla led a violent sweep of the region.

Until the Fifth Age, Ice Mountain possessed a huge concentration of White trees. Human development left only one survivor at the top of the mountain. The tree is involved in the Garden of Tranquillity quest.

Recently, an environmental disaster threatened the mountain, with heat from a coal-fed dragon-generated Power Station melting the ice and facing the icefiends with extinction. The crisis was averted in the Perils of Ice Mountain quest.