From the RuneScape Wiki, the wiki for all things RuneScape
Jump to: navigation, search
The Old School RuneScape Wiki also has an article on: osrsw:Outpost
This article is about the outpost in Ardougne. For other outposts, see Outpost (disambiguation). 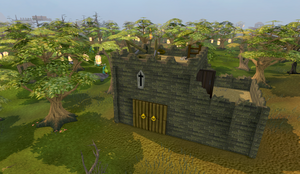 The modern day Outpost, in a fairly dilapidated state

The Outpost lies just off the northwest corner of West Ardougne, and can be reached with a variety of different methods. Many of the fast transport methods in this section require the start or completion of various quests before they can be used. Players should make sure they can use a method before trying to get to the Outpost via that method.

The only direct teleport to the Outpost is the Traveller's necklace's teleport.

Established around year 30 of the Fifth Age, shortly after the discovery of the rune essence mine by a wizard, the Outpost was originally a simple watchtower to guard the city of Ardougne from the many threats that existed close to the Galarpos Mountains range, though its life as a watchtower was short lived: in a relatively peaceful age, it was quickly abandoned and became derelict, used whenever various groups of people pleased to meet petty ends.

It was not until year 95 of the Fifth Age that the Outpost was put to important use. 65 years after its construction, a group of followers of Zamorak, a religion which was becoming popular in Kandarin, moved into the Outpost and began to cause trouble around Ardougne, in the period now known as "The Dreaded Years of Tragedy" in history books, in which the Zamorakians carried out various mischief such as turning all the children in Ardougne invisible and letting them cause chaos. Three years later, in 98, Saradominists launched a crusade to defeat the Zamorakians.

After several years of chaos in Ardougne, the authorities there called for help, and an army of Saradominists, led by the former friend of the Zamorakian leader, met with the Zamorakians and fought what later became known as The Great Battle, a battle which led to the deaths of everyone present, with the exception of the two leaders, the Saradominist and the Zamorakian, both being the most powerful mages. After seeing all the bloodshed they had caused, the two put aside their differences and both converted to Guthixianism, following the teaches of the neutral god Guthix, and later the two set about helping the steadily growing city of Ardougne, one of the two becoming the King, who ruled fairly and leniently.

The King that rose from the inconclusive Great Battle is believed to be the first in the line of Ardignas, a powerful and influential line in Kandarin. While his name is not recorded, some speculate that he is King Narras, a ruler who went mad and invented the game Hangman, though it is unlikely that Narras was the first; his dates do not match the dates of The Great Battle and the founding of the line. However, great kings such as King Ulthas, who is known to have formed the Ardougne City Council and the Royal Army of Ardougne. His two sons, King Lathas and King Tyras, still rule Ardougne, which has now been split into two parts, East and West.

Following the completion of the Making History quest, the Outpost is the location of a small Museum, which houses several oddities and artefacts as well as several books on the History of the Outpost itself, the modern-day history of Ardougne and the Ardignas line, and a book on "The Mysterious Adventurer", which is a tale told about the player themselves.

Several important items are on display in glass cases in the ground and first floor of the outpost, consisting of a helmet supposedly worn by Wally, a hero in the history of Varrock who slew the demon Delrith with the sword Silverlight, a battleaxe wielded by Arrav before his quest to find a magical shield to save Avarrocka from Zemouregal, a Mahjarrat, and last walking boots which were worn by Randas, a famous explorer who was known to have braved the Underground Pass only to be corrupted by Zamorak and turned into a Souless.

There is also a large, wooden shield in a glass case akin to those used by the Fremennik, nomadic people who are the closest link to the Fourth Age there currently is, and an Iron mace which serves as an early example of smithing weaponry, and two flags: one bearing the Star of Saradomin, and the other the symbol of Zamorak. On the roof of the outpost there lies a dilapidated and rotten catapult.

Two quests can be started in the Outpost, one of which is heavily centred around the building.

The update history project is a work-in-progress – not all updates to this topic may be covered below. See here for how to help out!
Retrieved from ‘https://runescape.wiki/w/Outpost?oldid=33228842’
Categories:
Hidden categories: