Trees are the most common scenery in RuneScape. Trees can be cut down through the Woodcutting skill for logs to cut into unstrung bows or crossbow stocks through Fletching, or to make a fire through the Firemaking skill.

Trees can be found almost everywhere in RuneScape, and they are the first training method of Woodcutting. A player only needs a hatchet to chop down a tree. For each log cut, the player gains 25 Woodcutting experience. This is the only type of tree, besides the achey tree, that always gives only one log when cut. However, if a player is wearing the Seer's headband 1, obtained from completing the Seers' Village Easy Tasks, 2 logs will be cut from every normal tree, but only giving 25 experience. Once they are cut, the log can be sold to players on the Grand Exchange, traded, burned using the Firemaking skill, or fletched using the Fletching skill. Normal logs are the only ones that are able to be chopped at level 1 Woodcutting. After the introduction of the Grand Exchange, the price of logs rose from only a few coins to over 100 coins.

A player only needs a Tinderbox to turn a normal tree's logs into a fire. Doing so earns the player 40 Firemaking experience. These logs can be burned at level 1.

Some trees can be grown using the Farming skill, by planting a Sapling of the appropriate type in a tree Patch.

Several types of trees can be planted in one's Player-owned house, mainly in the garden and menagerie. 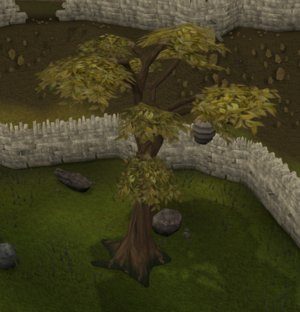 A (normal) tree with a natural beehive.
Retrieved from ‘https://runescape.wiki/w/Tree?oldid=35940818’
Categories:
Hidden categories: