From the RuneScape Wiki, the wiki for all things RuneScape
Jump to navigation Jump to search
The Old School RuneScape Wiki also has an article on: osrsw:Eagle (giant)
Giant eagle? (edit) 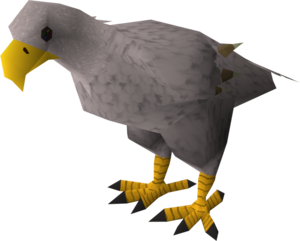 A giant eagle is discovered in the Eagles' Peak Dungeon in her nest. The hunter Nickolaus stumbles into her nest and the eagle mistakes him for her chick and does not let him escape. There are other giant eagles in the dungeon, like the Polar eagle, Jungle eagle, and the Desert eagle.

After completion of the Eagles' Peak quest, a player may use the eagles as transport. The eagles can be lassoed using a rope, and they can take you to their respective Hunter locations:

When these eagles are lassoed and used in their lairs at these Hunter locations, they bring you back to Eagles' Peak, which is very close to the Piscatoris hunting area.

This information has been compiled as part of the update history project. Some updates may not be included - see here for how to help out!
Retrieved from ‘https://runescape.wiki/w/Eagle_(giant)?oldid=35723984’
Categories:
Hidden categories: