There are several methods of getting to the Legends' Guild: 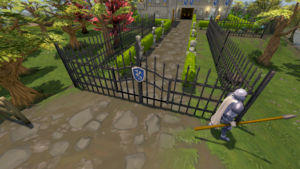 Entrance of the Legends' Guild

At the gates of the Legend Guild, there are two Legends guard on duty, only letting players who have started or completed the Legends Quest go through the gates. If a player who is a member of the guild enters the gates the guards proclaim "Legends' guild member approaching!".

In the garden there is a fountain and a Golden Gnome donated by SpecialEffect in 2016.

Downstairs is a basement that contains Giant bats, Pit Scorpions, and Shadow Warriors. 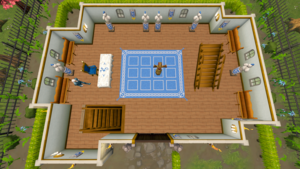 Radimus Erkle stands at the ground floor[UK]1st floor[US]. There is also the Gold Totem which was obtained through the completion of the Legends Quest. The Skills necklace and Combat bracelet are recharged at the totem.

The Cape of Legends, which once was the best in the game, has since been overshadowed by many capes. The cape can be used to be teleported in the guild or in front of the guild's gates. It can be really useful to quickly get access to a fairy ring.

On the 1st floor[UK]2nd floor[US] of the guild is a general store run by Fionella.

The eastern ladder on the 1st floor[UK]2nd floor[US] leads to a bank. The western ladder leads to Siegfried Erkle's Shop of Useful Items.

The replacement period per mithril seed is approximately 2 minutes 50 seconds. This store used to sell Silverlight, but this sword was removed from the store's stock. Instead, when lost, it can be reclaimed from Gideon Bede.

The following NPCs are members of the guild, confirmed either through conversation and/or being sighted inside.

The player also becomes a member of the guild, after Legends' Quest. 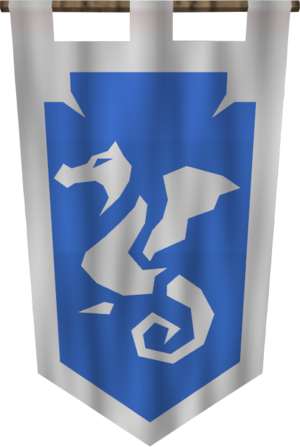 The logo of the Legends' Guild
Retrieved from ‘https://runescape.wiki/w/Legends%27_Guild?oldid=35680272’
Categories:
Hidden categories: