From the RuneScape Wiki, the wiki for all things RuneScape
Jump to navigation Jump to search
The Old School RuneScape Wiki also has an article on: osrsw:Gnome Empire

The Gnomish Empire is a monarchical region bordering and within the human nations of Kandarin and Karamja. The Empire is not referred to as such on the world map and is often not recognised by players, but it has been named as such by various characters, the most prominent of which is perhaps Glouphrie. The empire is considered part of Kandarin on maps, but it isn't known what the exact relationship and governmental structures are between the Kingdom and the Empire.

Although it was once much larger, as of the year 169 of the Fifth Age, the Gnomish Empire consists mostly of two settlements; the Tree Gnome Stronghold (northwest of Ardougne) and Tree Gnome Village (northwest of Yanille). Despite being considered one empire, both settlements have their own monarch.

The map provided shows the current Gnomish Empire; the red area represents the Tree Gnome Stronghold; blue shows Tree Gnome Village; green is Hazelmere's house and the brown region is the gnome shipyard on the island of Karamja.

There is also a gnome colony located to the south-west of the island of Tuai Leit in the arc region of the eastern lands, consisting of a berry bar operated by Terri and a seed store operated by Ani. 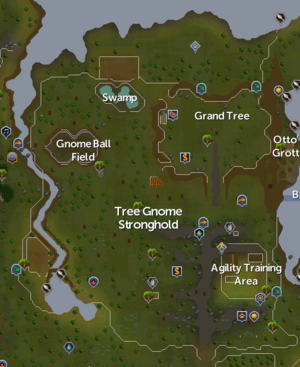 The Gnomish Empire was first established during the First Age, but has changed in nature and leadership many times since. It was, at first, on good terms with the elven nation of Tirannwn, but was destroyed during the God Wars.

The gnomes later resurfaced during the Fourth Age, at which point they re-established their largest settlements; the Tree Gnome Stronghold and Tree Gnome Village. After the elves were forced to leave the region in 1930 to fight in the Elven Civil War, the Gnomish Empire extended to cover most of what is now Kandarin, although the humans of Ardougne were an exception.

Some time after the Battle of Atarisundri, the Empire began to weaken under a destabilised government and the soldiers of the Mahjarrat General Khazard. By the early Fifth Age, the Empire has shrunk considerably, primarily to human settlers and attacks suffered by Khazard's Army. This largely contributed to Gnomish Empire splitting into two.

Today, the Gnomish Empire remains a powerful kingdom, but remains comparatively small geographically to its height.