McGrubor's Wood is a fenced-in, wooded area north of Hemenster and west of Seers' Village and is mainly involved in quests. It is only accessible from some loose railings in the north. A forester can be found at the gate, who only speaks when the player tries to enter via the main entrance.

The location of the entrance. 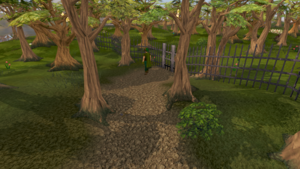 The entrance to McGrubor's Wood.

Low-levelled players might want to bring armour because there are aggressive level 33 guard dogs inside. The guard dogs have a low constitution but a high attack, they are only dangerous to pures or low defence accounts. This wood is the only place where players can find red vine worms, which are needed in the Fishing Contest quest. This is also sometimes involved in the quest Wanted! as Solus Dellagar can be found there, as can dwellberries. There is a crate that players may need to search as the solution to a map clue during a Treasure Trail. The dwellberries that spawn here can be used for Plague City. 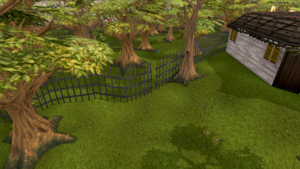 The only way into the woods is by the loose railing to the north of the main gate.

There is a little shack in the middle of the wood. When players have a shiny key (obtained from the Temple of Ikov quest) they can enter and descend the ladder.

At times a penguin spy can be found in this location. An evil tree spawns here from time to time as well.

Although there is an abundance of trees found in the wood, training is not advised due to the large amount of aggressive guard dogs and that there are no trees higher than oak.

The area features in You Are It as the starting location for the quest, and the location of the entrance to Charos' tomb.