Port Khazard is a port located south-east of East Ardougne and north-east of Yanille. It is not visited often, except for chartering ships to other locations, the Fishing Trawler minigame, some quests like Recipe for Disaster, and for Treasure Trail clues.

Players can start the Fishing Trawler minigame here by talking to Murphy. He also gives players the sextant required to complete Treasure Trails and helps players go diving, during and after the Pirate Pete subquest in Recipe for Disaster.

In Port Khazard there are two general stores, each run by a Shopkeeper. Besides the usual goods, they also sell the equipment that is used during the Fishing Trawler minigame, such as bailing buckets or swamp paste. Despite the two separate buildings, they sell the same products. 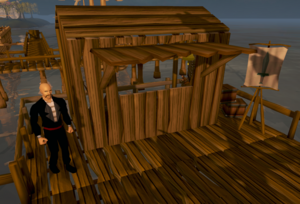 Tindel Marchant is a character who for 100 coins each can polish and restore rusty swords you bring to him. There's a chance the sword will be too damaged to restore. Restored swords range from bronze swords to rune swords, and he will purchase the more valuable ones from you.

Players can speak to either trader crewmember in Port Khazard to book passage on a charter ship and travel to other places for a fee. Destinations include Catherby, Port Tyras, Brimhaven, Port Sarim, Karamja, and Port Phasmatys.

Two planks near the general store (spawn time is approximately around two minutes). Players sometimes visit Port Khazard to pick up these planks.