From the RuneScape Wiki, the wiki for all things RuneScape
Jump to navigation Jump to search
The Old School RuneScape Wiki also has an article on: osrsw:Rellekka Hunter area

The Rellekka Hunter area is one of four Hunter training areas. It is located northeast of Rellekka near the entrance to the dwarven city of Keldagrim.

It is a popular destination for hunters and has long helped support Rellekka's hunting economy. Rellekka's fur stall allows players to sell fur from some of the local creatures, but players who would rather keep the items they obtain while hunting can use the nearby bank in Keldagrim, Zanaris (by using the fairy rings), or Peer the Seer as a bank deposit box, as long as his task has been completed in The Fremennik Trials.

There are some banite rocks on the far northern coast. 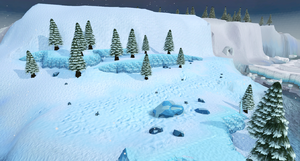 In the Hunter area is a large variety of creatures, which players can hunt using several different methods. In this hunting area it is possible to catch the following:

This area is generally used more often by low-level hunters, but the variety of monsters offers something for hunters of all levels.

Bird snaring, pitfall trapping, and butterfly netting areas are located on the northern ice area. To access this area, players must climb a series of natural stairs formed by chunks of ice, which requires an Agility level of 35.

To the north-east of the iceberg is an area for hunting azure skillchompas.

This information has been compiled as part of the update history project. Some updates may not be included—see here for how to help out!
Retrieved from ‘https://runescape.wiki/w/Rellekka_Hunter_area?oldid=35918914’
Categories:
Hidden categories: