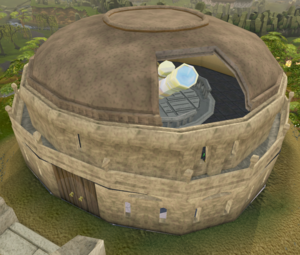 The Observatory complex is mostly used during the Observatory Quest. It consists of four parts. The area was overrun by goblins, who have damaged the telescope, and players must fix it during the quest. The original bridge to the observatory has been destroyed, so you must go underground at the Ruined buildings and through the Observatory Dungeon to get to it. After the quest, a rope attached to the broken bridge outside the front door may be used to access the Observatory quickly.

The observatory reception is a small building north of the observatory itself. The Observatory professor is here at the start of the Observatory Quest, along with his assistant. There is a range in the building and a well just outside. On two tables are copies of the Astronomy book and the Glassblowing book. There is a Large orrery in the centre of the room, and a chart on the wall that keeps track of Shooting Stars that have landed. This is the noticeboard used in the easy Ardougne Tasks, it notes the last five Shooting Stars landing times and who if anyone has discovered them.

Though the design of the telescope is from Scorpius, the original has gone, and the current structure is a reproduction.

The update history project is a work-in-progress – not all updates to this topic may be covered below. See here for how to help out!
Retrieved from ‘https://runescape.wiki/w/Observatory?oldid=31524393’
Categories:
Hidden categories: