From the RuneScape Wiki, the wiki for all things RuneScape
Jump to navigation Jump to search
The Old School RuneScape Wiki also has an article on: osrsw:Trollheim

Trollheim is one of the tallest mountains on Gielinor. It is located directly to the east of the entrance to the Troll Stronghold.

All methods of travelling to Trollheim require at least partial completion of the Troll Stronghold quest.

Trollheim has several climbable Agility shortcuts which vary in required Agility levels from 41-64. The most important shortcut (to avoid the rock-throwing trolls) requires level 44. Players with low Agility can still reach the summit by using the winding paths. On this map paths are marked in white, and dangerous areas in red. 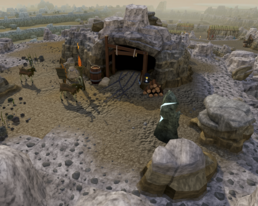 The Entrance to Eadgars cave, At the top of Trollheim.

Many quests involving trolls are also involved with Trollheim: