The Feldip Hills are positioned to the south of Yanille and Kandarin and southeast of the Castle Wars arena. They are mostly populated by ogres. The capital of the Feldip Hills is the city of Gu'Tanoth; to the west of Gu'Tanoth is Jiggig. Jiggig is filled with Zogres and Skogres (zombie and skeleton ogres, respectively). In the southern areas is a Hunter training area. After completing the quest Big Chompy Bird Hunting, the hunting area can be used to hunt Chompies. In the south-east of the area is the city of Oo'glog. North-east of Oo'glog, the Monastery of Ascension can be found. Also note, to the west near the coast, north of the fishing spots, is a Death rune spawn. Despite the fact that this area is called Feldip Hills, its middle part consists of jungle and southern part consists of plains with many Eucalyptus trees.

The history of the Feldip Hills has largely been lost to time and war. The ogre race, which dominates it today, possesses no known writing system and have little interest in history or records. Therefore, little is known even of its modern activity.

The first documented occupants of the Feldip Hills were the skavids, a race of small semi-humanoid creatures. The skavids, who likely claimed the area in the early Second Age, established a hold in the region, using the area's mountainous terrain and ocean borders as protection against hostile races that sought to gain power in the area.

Of the now nearly extinct skavid race, virtually nothing is known. Today their minds and bodies are frail, their surviving numbers extremely few. Their persistence in using their own language even today, though, suggests a strong sense of loyalty and custom that indicates that their settlement may once have been a prosperous one.

The War of the Feldip Hills[edit | edit source]

The skavids would lose their freedom in the cataclysmic God Wars, during which the gods and their armies directly fought to gain control of Gielinor and its populace. Following the banishment of the god Zaros by his Mahjarrat general Zamorak, the gods were able to claim land and power without his intervention. These cataclysmic God Wars would eventually come to engulf the whole of Gielinor, a fact that proved disastrous to the Skavid race.

Enjoying the wars, the deity Bandos entered battle with armies he had brought in earlier from Yu'biusk.[1] Bandos brought with him a number of races, such as the orks, ogres, ourgs, hobgoblins, and goblins.

As the God Wars progressed, Bandos's army became increasingly dangerous, its ever-shifting allegiance creating an unprecedented degree of bloodshed. The Feldip Hills' defensive appeal, with the sea at two sides and mountains at the northern and southern borders, made the Feldip Hills a prime target for Bandosian invasion. Led by Bandos himself, a formidable faction of the ogre army invaded the region and, with relative ease, conquered its peaceful people. The skavids were bound to enslavement, depleting their populace and forcing many to madness. By the end of the wars, the ogres had permanently established their reign.[1]

Bandos, now capable of invading the valuable lands to the north, established a powerful empire in the Feldip Hills primarily as a base-of-operations. Using the both his followers and the enslaved skavids, Bandos created a nearly unconquerable hold over Feldip Hills. From here, Bandos's army launched countless campaigns against their enemies in the north.

The empire's capital, Gu'Tanoth, was soon created on the peak of a large mountain near the Hills' northern border. Here, high above the surface and surrounded by volcanic activity, Bandos's followers were safe, although the city was primarily a military stronghold. The ogresses, in accordance with the ogres' split in society, travelled further south into the temperate jungles, where they established Oo'glog. Other Bandosian races, such as fayrgs, raurgs, and ourgs also possessed a considerable presence in the area.

As time progressed, many of the races which had dominated the region began to dwindle and depart. By the beginning of the Fourth Age, the only significant races within the region were the ogres and Thorobshuun goblin tribe. This situation would further deteriorate with the establishing of the Edicts of Guthix, forcing Bandos to physically depart the plane of Gielinor.

The ogres eagerly awaited Bandos' return, while the Thorobshuun were thrown out of Feldip Hills by the ogres in a civil war.

The following takes place during Watchtower.

In 169, the ogre shamans of Gu'Tanoth used enslaved skavids to steal a collection of magic-infused crystals from the Yanille Watchtower, which had been constructed as a means to survey ogre movement in the region. This left the tower's protective and scrying devices useless, seriously compromising Kandarin's security.

With the help of an adventurer, the crystals were recovered from the Ogre Enclave beneath Gu'Tanoth. Several shamans were also assassinated by the adventurer, causing some chaos among the Gu'Tanoth ogres.

The Attack of Jiggig[edit | edit source]

In the year 169 of the Fifth Age, a member of the H.A.M., an anti-monster extremist cult, launched a one-man assault on the Ogre holy site of Jiggig. Sithik Ints, using a young apprentice and a necromancy seal stolen from the Wizards' Guild in Yanille, detonated a pack of explosives in the catacombs beneath Jiggig. This attack killed hundreds of ogres and, worse still, revived the majority of the dead resting in the tombs.

The ogres barricaded their undead brethren inside to prevent them from spreading and causing havoc, with the shaman at the site, Grish, managed to obtain a human adventurer's help in searching for evidence. They were able to bring Sithik to justice, and learned from him that the spell was permanent. They then informed Grish, who was upset as they would have to find a new burial site. He had them reclaim an ogre artefact from the former burial site, and began making preparations with the other ogres to search for a suitable burial site. 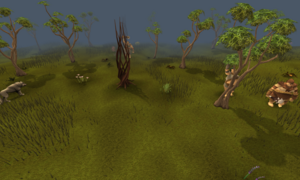 The more coastal areas of the hills

The Feldip Hills can be accessed using a variety of ways including:

The Feldip hills has 3 quest start points of which are:

It is also involved with: