From the RuneScape Wiki, the wiki for all things RuneScape
Jump to: navigation, search
The Old School RuneScape Wiki also has an article on: osrsw:Western Sea 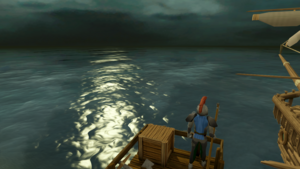 The Western Sea as seen from Port Tyras

The Western Sea is the great ocean due west of Tirannwn, bordering the known world of Gielinor. Not much is known about the sea, apart from The Lost Grove and the large island which houses the minigame Soul Wars, which is quite a distance from the mainland and the two minuscule isles that are closer to the shore. Nothing is known about the lands that lay on the other side. Players briefly traverse it when sailing on a Charter Ship to or from Port Tyras.

Like the other four main seas of Gielinor, the Western Sea is so called because of its position on the RuneScape world map. The sea is found west of all mainland, past the regions of Tirannwn and the kingdom of Kandarin. It is not known, though, whether or not further lands lie west of the sea, and as such the current name may be inaccurate.

It is unclear exactly where the borders of the Western Sea lie. It is thought that it meets the Northern Sea at the point where the Piscatoris Fishing Colony is located, as it is here that the land turns east and the climate of the sea adjusts to a colder temperature.

The border with the Unquiet Ocean is far more difficult to deduce, as much of the sea below Tirannwn is unmapped. The sandy coastline below Oo'glog is where it is thought that the two seas meet, however.

Compared to other seas, the Western Sea is relatively unpopulated with islands. The only major islands so far are The Lost Grove and the Soul Wars island. Other explored areas are two minuscule unnamed isles near the coast of Tirannwn (found just west of Tyras Camp, and are considered so insignificant by the sailors of the area that they have been given no names).

The most western of the small isles is little more than a jagged piece of rock. The second, though slightly larger, is just as sparsely decorated, with the surface covered simply with grass and mud.

The coastline of the Western sea is mainly steep grassy banks and muddy slopes. No beaches exist, primarily due to the cool climate and forested environment.

However, most of the coastline has yet to be explored. Only the section bordering Tirannwn has been mapped, with the coastline encompassing the Poison Waste and that of the forest hunter area still unknown. It is probable, however, that the coast there is much the same, as the entirety of the Western sea falls under the same climate conditions, despite the considerable difference in latitude.

Reports have been made of a coastline on the other, unexplored side of the Western Sea. Although not found ingame, a vertical coastline was said to have been briefly visible on the World map a few years back, on the Jagex homepage. This could have been Soul Wars.