The Fishing Guild is a guild located in a fenced area north of East Ardougne and west of Hemenster. Level 68 Fishing is required to enter, though this can be boosted. Players who enter the guild with a boost and log out will be placed outside the guild, so it is advised to carry a stat-boosting item before logging out if they wish to enter immediately again.

Aside from Catherby, the Fishing Guild is one of the most popular places to fish because of the nearby bank and small obelisk. It is also one of the few guilds that is usually filled with players. For this reason, players who want to relax and socialise can visit the Fishing Guild for the perfect environment.

Right inside the guild is the master fisher. Players can talk to him to receive fishing advice or to purchase a Fishing cape for 99,000 coins.

The Fishing Guild is located south-west of Seers' Village and north of Ardougne, in the village of Hemenster. There are several transportation options:

Talking to Goomah will allow you to travel to the Deep Sea Fishing hub.

The Fishing Guild contains three main buildings: the entrance hall, the bank, and the fishing store.

They are explained in detail below. 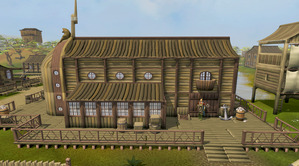 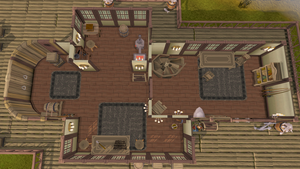 A view of the interior, showing the harpoon, big fishing net, range, and lobster cage.

Here is a range which players can use to cook food. It is fairly close to a bank. However, many players go to cook next to the bank in the Rogues' Den, since there is an everlasting fire next to the banker, or in the Cooking Guild with varrock armour 3. A lobster pot, harpoon, and big fishing net spawn here. There is also a ladder that leads to the second floor, which contains beds for the employees. 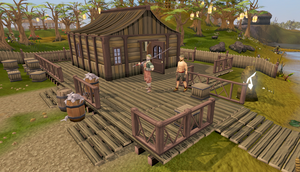 Players can access their bank here. It is adjacent to the fishing store. Notably, this is the closest bank to shark and lobster fishing spots. The bank is also a location used in Treasure Trails. Blowing a raspberry whilst completing a clue scroll causes a double agent to appear. This near immediate access to a bank makes the Fishing Guild brilliant for profit and experience alike. Fisherman Jones can be found just outside of the bank. He is the starting point for the quest Deadliest Catch. 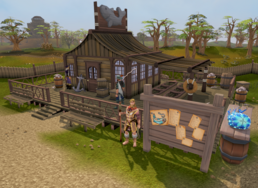 There is a Fishing Guild Shop run by a man named Roachey. He has a supply of fishing bait (3 coins each) and feathers (6 coins each).

He will buy and sell player-stocked raw or cooked cod, mackerel, bass, tuna, lobster and swordfish.

The Fishing Guild contains a small obelisk for recharging Summoning points. It is right at the entrance to the northern dock. This obelisk is invaluable for players who are using familiars such as the granite crab, ibis, or granite lobster to accompany them while fishing.

The guild is ideal for players fishing sharks, lobsters, tuna, and swordfish. The proximity of a bank and a range allows almost non-stop fishing, making it a great place to train.