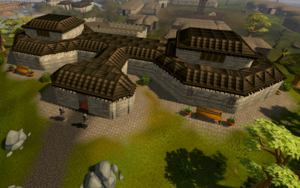 The entrance to the Ardougne Monastery leads into a foyer with two altars at the back.

The Ardougne Monastery in the kingdom of Kandarin is a building, located south of Ardougne Zoo and north of the Fight Arena. It is made up of two two-storeyed towers (east and west) joined by a single-storey foyer. It is dedicated to the god Saradomin and named after the tower to the north-west.

The Ardougne south-east mine is found nearby. A bush Farming patch is also located near the entrance.

The monastery is home to Brother Omad, who is the starting point for the Monk's Friend quest. He also finishes the quest, and the Clock Tower Monastery houses the party at the end of it. Popping one of the balloons during such a party is an easy achievement in the Ardougne achievements. Additionally, several attackable monks live in the monastery. Unlike the monks in the Monastery of Saradomin near Ice Mountain, these monks do not heal players or themselves.

The east tower contains a spiral staircase to an upstairs room, but it does not seem to contain anything useful on either floor. The west tower's ground floor[UK]1st floor[US] contains a stove and a lit candle spawn. A similar staircase leads up to a small room containing two beds.

To solve a medium Treasure Trails clue, a monk of the monastery must be killed to obtain a key that opens a locked chest in the Varrock chapel.

The update history project is a work-in-progress – not all updates to this topic may be covered below. See here for how to help out!
Retrieved from ‘https://runescape.wiki/w/Ardougne_Monastery?oldid=33142859’
Categories:
Hidden categories: