From the RuneScape Wiki, the wiki for all things RuneScape
Jump to navigation Jump to search
The Old School RuneScape Wiki also has an article on: osrsw:River Elid

The River Elid is a large river that flows through the vast Kharidian Desert.

The River Elid is the holy river of Elidinis, the Menaphite goddess of fertility and wife of the desert's chief god Tumeken. Those that please her are rewarded with clean water and fresh crops. Disrespecting her, however, can result in dangerously low levels of water from the river; one town is even known to have angered her so much that any water taken from the river would evaporate.

Despite being amongst Gielinor's longest rivers, the River Elid shows no signs of being used for transport or trade. No ships can be found on it, and the bridges that span it are built so low that few boats would be able to pass under them. This is most likely due to the small population of the desert. Upstream from the Menaphite capitals (Menaphos and Sophanem), the only settlement on the riverbanks themselves is Pollnivneach. Because Pollnivneach offers little trade, the Menaphites have had little incentive to trade up the river and prefer the mysterious lands in the southern ocean.

The River Elid is infamous for the dangerous crocodiles that inhabit it. Capable of swimming through the river with ease, these creatures often spell death of unprepared travellers. They are sometimes assigned by Vannaka, a mid-levelled slayer master. They are very unpopular assignments due to their lack of good drops, their ability to swim into the river, and the requirement of waterskins or an enchanted water tiara to fight them efficiently.

The River Elid occupies what is mainly the eastern side of the known Kharidian Desert. It begins at an underground source, found within the Water Ravine Dungeon. Here it bubbles up from an unknown location and flows from a cave entrance at the south side of the caves. From there it forms a waterfall and flows south to an area just east of Shantay Pass.

The river flows south, effectively dividing the desert in two. It passes the destroyed ruins of Uzer, including the Uzer Hunter Area and the Dominion Tower. From there it runs along the eastern side of the small desert town of Pollnivneach. It then turns slowly west, eventually running south again. It then passes through the twin desert capitals of Sophanem and Menaphos, where the river is more important than anywhere else. Once it passes through the Menaphite capitals it flows through a fertile delta, and into the Southern Sea. 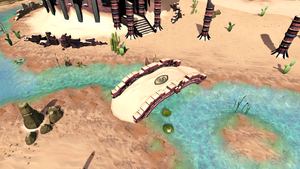 The northern bridge across the Elid

There are only three bridges that span the Elid. The first, more frequented bridge can be found west of the Ruins of Uzer, where those planning on travelling to Nardah usually cross. A second bridge was recently constructed following the end of the Menaphite - Al Kharid war as a gesture of goodwill between the two desert nations. This bridge can be used when travelling from Pollnivneach to any of the areas to the south, such as Sophanem, Nardah or the Agility Pyramid. There is also a very large third bridge that connects Sophanem and Menaphos. While this would usually be a centre of travel and a bustling location for travellers, merchants, and priests, it has recently been sealed off due to political unrest between Menaphos and Sophanem caused by a series of plagues. Crossing it from Menaphos to Sophanem requires the player to complete the Contact! quest. It is not possible to cross the bridge from Sophanem to Menaphos.

It is also possible to cross the river using Ali Morrisane's magic carpet transport network, although this may only be done when travelling directly from Shantay Pass to Uzer or Pollnivneach to Nardah.