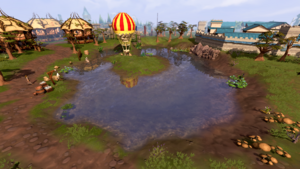 Lake Crystalmere is a body of water found in north-western Asgarnia. Its name is revealed only in the first RuneScape novel, Betrayal at Falador, on the map found in the novel. In the novel, Lake Crystalmere is said to stretch out to the horizon, suggesting its size has been trimmed back considerably in keeping with Scale Theory.

Lake Crystalmere borders southern Taverley and north-western Falador, and contains a peninsula in the centre. It is in this peninsula that The Lady of the Lake resides. According to the wizard Castimir, legends surrounding Lake Cystalmere are common amongst Asgarnians; one such tale claims that a number of aquatic dragons inhabit caves honeycombing the lake's depths, and can sometimes be seen emerging into the air. This specific legend sounds very similar to the real-world Loch Ness Monster.

The lake was of no purpose until the Third Age, when a group of exiled elves from Tirannwn journeyed to the lake. Unfortunately, they were trapped in the centre of the peninsula by a force of Zamorakians. Luckily, a troop of Saradominists aiming to destroy the now-ruined empire of Zaros strayed from their path and broke the siege. In return, the elves taught them the art of archery. Until the Fifth Age, the lake was still of no significance. Then, when the invasion of the trolls began, a troll shaman (Magic Stick) ventured in the cave found on the peninsula and started creating monstrosities with his magic. Soon, an adventurer and a mage (Ariane) defeated the troll and the monsters ceased to come out of the cave.