From the RuneScape Wiki, the wiki for all things RuneScape
Jump to navigation Jump to search
The Old School RuneScape Wiki also has an article on: osrsw:Northern Sea 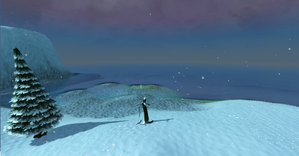 The Northern Sea extends from Kandarin to past Morytania, stretching across the northern edge of the Wilderness. In the part of the sea north and north-west of Kandarin, there are several islands: The Fremennik Isles, Waterbirth Island, Miscellania and Etceteria, Lunar Isle and Dragontooth Island. Most of these islands can be reached from the Rellekka docks, but Dragontooth Island can only be reached from the Port Phasmatys docks. Mermaids can be found on an island somewhere in the Northern Sea.

The three mermaids, Anemone, Tentacle, and Urchin all reside at the Blue Spiral. 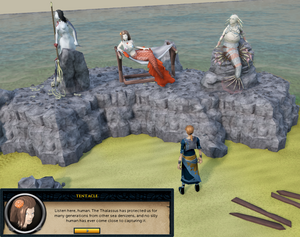 The mermaids, from left to right: Anemone, Tentacle, and Urchin
Retrieved from ‘https://runescape.wiki/w/Northern_Sea?oldid=35521442’
Categories: