From the RuneScape Wiki, the wiki for all things RuneScape
Jump to: navigation, search
The Old School RuneScape Wiki also has an article on: osrsw:Tower of Life (building)
This article is about the building. For the quest, see Tower of Life. 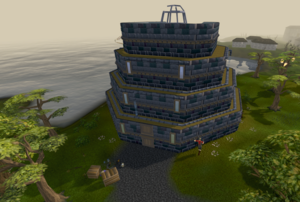 The Tower of Life is a tower south of Ardougne which was released on 19 February 2007. The tower features prominently in the Tower of Life quest. In the quest, you build several parts of the tower for the alchemists, since the builders refused to. The alchemists, who turn out to be callous and cruel, later flee the area when you cure and free their hybrid victim, the Homunculus. After the quest, you gain access to the basement dungeon, where the Homunculus now resides and where you can play Creature Creation.

The Tower of Life is found south of East Ardougne. It can be easily accessed using:

The closest bank without using teleportation is the one south of the marketplace in East Ardougne. If players can use fairy rings, then the bank in Zanaris or near TzHaar Fight Cave BLP are closer.

There are four floors above ground and a basement dungeon. The first, second, and third floors are used in the Tower of Life quest.

The ground floor contains many searchable crates. Most contain items of use in the Tower of Life quest. One contains triangle sandwiches. After the quest, the crates can still be searched for components of the builder's costume.

The dungeon can be entered after you complete Tower of Life. Talk to the Homunculus in the northern part of the dungeon to learn how to play the Creature Creation activity. The dungeon contains six altars, or symbols of life, which are used in the activity.

The northern part of the dungeon contains a "magic well". Water from this well presumably is magical and is what flows through the many pipes and altars in the tower.

The centre of the dungeon contains the equipment the alchemists presumably used to create the Homunculus. There are experiment cabinets, experiment tables, shackle tables, retorts, and cages here. All currently have no use.

The tower contains no attackable monsters, except the hybrid monsters that players can make when playing Creature Creation.