Box traps are items used in the Hunter skill. Similar to bird snaring, box trapping involves laying a box and waiting for animals to be trapped. Players unlock box trapping at level 27 Hunter.

After a player sets up a box trap, they will automatically walk one square west to stand next to the trap. However, one may counter this by moving an item in the inventory while setting up the trap or by clicking when or right before the box springs open on the spot the player wishes to stand.

Box traps can be bought from Aleck for 38 coins in the Hunter shop in Yanille, west of the Pet Shop.

Up to five box traps may be taken from Nyriki's crate or the Ruined boat for free.

In addition, if a player leaves a shaking box alone for a while, it will collapse. The captured creature will be lost if this happens. 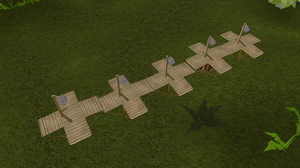 Multiple box traps in a row.

It is recommended that players bring multiple box traps with them (perhaps 10-15) while hunting. This is because it is easily possible that they may neglect a trap they set up and another player may steal their box trap.

Box traps can be baited or smoked, both of which increases the rates of success for catching animals. The bait disappears after each successful trap. Many hunters find this to be too much effort or inconvenience, for the small increase in capture rate.

Smoking a trap requires level 39 Hunter. To smoke a trap, you use a Lit torch with the already set up trap. Alternatively, you can sip a Scentless potion and your traps will automatically be smoked for 6 minutes.

Certain trapped animals appear in the inventory. Left-clicking the animal will release the trapped animal. Trapped chinchompas are stackable, and can be used as a multi-target ranged weapon.

With the release of the Summoning skill, more animals were made available for box-trapping. Note that only the baby versions of the animals can be caught using box traps.

This information has been compiled as part of the update history project. Some updates may not be included - see here for how to help out!
Retrieved from ‘https://runescape.wiki/w/Box_trap?oldid=35682643’
Categories:
Hidden categories: