From the RuneScape Wiki, the wiki for all things RuneScape
Jump to navigation Jump to search
The Old School RuneScape Wiki also has an article on: osrsw:Fossil Island Volcano 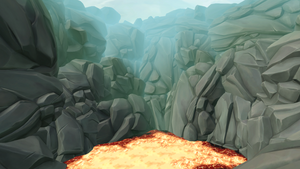 The crater of the Anachronia Volcano.

The Anachronia Volcano is a volcano on Anachronia and the tallest mountain on the island. A cave on the side of the volcano contains an ancient laboratory of Kerapac, who used the Needle specifically to gain access to it as it contained an ancient invention of his, designed to create shadow anima.

During Desperate Measures the player infiltrates the underground lab and allows Jas to recapture both Kerapac and the Needle. Afterwards Ful destroys the lab by emerging from the lava causing the volcano to erupt.