From the RuneScape Wiki, the wiki for all things RuneScape
Jump to navigation Jump to search
The Old School RuneScape Wiki also has an article on: osrsw:Witchaven

Witchaven is a small village east of Ardougne. It provides access to the Fishing Platform and features heavily in the Sea Slug Quest, The Slug Menace, Kennith's Concerns and Salt in the Wound quests. It is also a notable fishing spot. The Witchaven Dungeon is to the west, in the shrine.

During The Slug Menace, most of the population falls under the mind-controlling properties of the sea slugs and are only liberated from said control after Salt in the Wound.

Until recently, Witchaven was a prosperous fishing town on the coast of Kandarin. It drew most of its trade and commerce from fishing in the Sea, which was brimming with a variety of fish.

Following the construction of the nearby Fishing Platform, the city's trade diminished. The massive amount of fishing underway at the Platform soon left the area practically fishless, effectively ruining Witchaven and diverting its trade to areas such as Brimhaven, Rimmington, and Catherby.

Today, Witchaven's population has lessened and commerce is virtually non-existent, making it a ghost town. The lack of trade has left the area's once bustling port destroyed, with Witchaven's bay full of sunken ships, cargo, and other debris. Many of the townsfolk seem to be suffering from an unknown illness, much to the interest of the Temple Knights.

It is revealed during the Song from the Depths quest that the town's name is derived from a siren that lured fishermen to their death.

According to Temple Knight archives, the town's population is now only 23, although it was much larger in the past.

In terms of trade, the Witchaven's demographics are 20% fishing, 5% cooking, 5% smithing, 5% theological, with 65% unemployment. 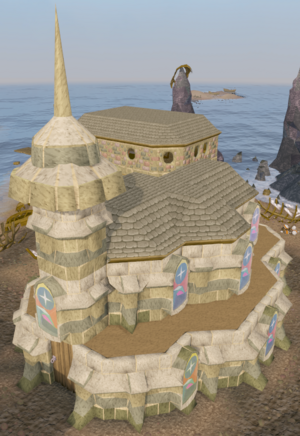 Its citizens start turning yellow during the Slug Menace quest due to being possessed by the Sea Slugs. After Slug Menace, notable characters such as Mayor Eustace Hobb disappear from Witchaven.

There is an altar, spinning wheel and water sources available in the town. There is a clay oven but it is broken. North of the town are several willow trees.

The fishing store owner Ezekial Lovecraft mentions his relatives were writers, and about his grandfather Howard. Howard Lovecraft was a famous real life horror writer who wrote about giant evil-god-like-squid monster Cthulhu. It seems to be related with Slug Menace.

Witchaven is home to the one of only two sailfish, the other one being upstairs in the Fishing Guild.

Most of the villagers are in league with Mother Mallum, and those that do have very yellowish skin. In one of the houses, players can find Kennith, Caroline, and Kent, whom they help during the Sea Slug quest. Other non-player characters resident in Witchaven include:

The following music tracks are unlocked in Witchaven:

The entrance to the Sea Slug Shrine.

Witchaven is involved with the following quests: