Back to my Roots

From the RuneScape Wiki, the wiki for all things RuneScape
Jump to navigation Jump to search
For the achievement, see Back to my Roots (achievement).

Back to my Roots is a quest about the Jade Vine Maze on Karamja, which you have to traverse in order to get a sapling for Lord Handelmort's mansion's garden. Like its prequel, The Hand in the Sand, and its miniquest sequel, One Foot in the Grave, the quest is filled with puns.

Use your Slayer skills to battle out of control vegetation with an attitude, cultivate your wits and stretch your Agility to solve a cunning maze - all to make a gardener's day. Do you have what it takes to cut this quest down to size?

Start the quest by talking to Horacio, in East Ardougne, and offer to help him with his gardening. He can be found in the garden of the big house just north-west of the Ardougne Market, near the two fountains. He'll want you to get a special vine that grows near Shilo Village. He cannot give too much information and he recommends visiting Wizard Cromperty in East Ardougne.

Now go to Cromperty in his house northeast of the market, behind the servants' guild, and he will ask you to investigate the reason the RPDT is not delivering Cromperty's parcel. 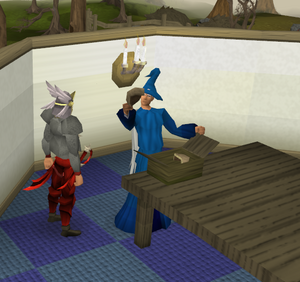 The next stop is the RPDT headquarters south of the southern Ardougne bank. Talk to any of the RPDT employees. The employee will say that the smelly package is delayed because the address is unreadable. The RPDT employee takes the subtle hint that a non RPDT employee can open the parcel, so locate the parcel on the table and open it. Inside there is a severed wizard's hand. It has no use during the course of the quest, but it is used in the One Foot in the Grave miniquest.

Go back to Cromperty and talk to him. He opens the package and discovers that the item in the package appears to be broken. Make a new pot lid out of soft clay. Make sure to put the unfired pot lid in the pottery oven. You can find a Potter's wheel and a Pottery oven west across the river from the north bank. A pot lid made prior to talking to Cromperty will not work. Similarly a pot lid purchased on the Grand Exchange will not suffice; Cromperty will say the lid is too small.

Cromperty's next instructions are to talk to Garth, the farmer near the fruit tree patch in Brimhaven. A boat to Brimhaven can be found slightly east of the RPDT workers, for 30 coins or for free with ring of charos (a), or use the Karamja lodestone and run north. Garth will tell you how to get the jade vine to grow in Horacio's garden. You can use the cart of Hajedy to get to Shilo Village very quickly. Hajedy is located only a few steps east of Garth. Teleporting to the Al Kharid lodestone and using the glider if you are able is also a quick way to travel to the maze.

You cannot take a familiar with you into the maze.

Items needed: empty pot, Wizard Cromperty's pot lid, a plant pot with soil, and on tool belt or inventory, a machete, a spade, a Woodcutting hatchet, and a pair of secateurs
Items recommended: Three oak planks and five ropes, to build the rope rack by the giant Karamjan Jungle Eagle if you'd like.

There is a bank in Shilo Village. Given that the maze is loaded with aggressive monsters, take decent armour, food and anti-poison. A super defence potion is recommended as well. The alternative to food, armour and anti-poisons is to take a few prayer potions, equipment with prayer bonus and a Prayer book with a holy symbol to cure from poison. With this method, the Protection from Melee prayer (level 43 Prayer required) will halve damage, except the damage taken from failing obstacles and occasional poisoning.

The entrance to the maze north-east of Shilo Village

How to get to the maze[edit | edit source]

The quickest way to the maze is to use either the Wicked Hood teleport to the nature altar or by using the Karamja lodestone (assuming you have activated it), then run southeast. If you do not have access to either of those options, follow these instructions (refer to the picture for more help on getting to the maze): From the Shilo Village exit, go east and jump on the stepping stones. Go far north past the maze to a log, cross it, and go south again. An alternative path is to walk around Shilo and go east along the northern fence of Shilo. Try to find an endpoint of a vine to climb onto on the north-west corner of the maze. The 'climb-on' vine point forms the maze entry. As the maze is fairly close to the Nature runecrafting altar, all paths to the maze are fairly similar to the nature runecrafting trips.

You can also use the Fairy ring code CKR Karamja: South of Tai Bwo Wannai Village Shilo Village and run straight east past the nature altar, or a Spirit graahk to teleport you (57 summoning required). The fastest way is to use the wicked hood's teleport to the Nature Altar. This is usually the fastest way to the maze, unless you used Hajedy's cart to get to Shilo Village.

In the maze are many creatures, some aggressive, some poisonous. Players should bring anti-poison potions and food.

The path through the maze[edit | edit source] 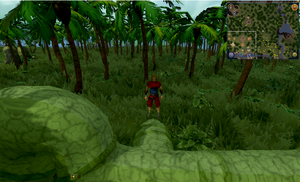 The entrance to the maze. 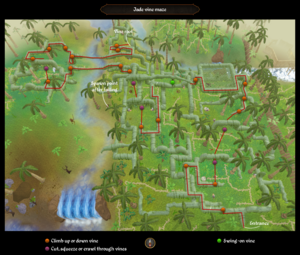 Scars can be seen on the vine.

The maze has a number of navigational options:

Tip: Scars on vines can help players to find their way through the vine maze.

At last, the root of the problem!

The end of the maze features the vine root. It can be obtained by finding the patches of loose soil, where right clicking will show "Dig Loose soil", which is used to expose the vine root. Then a new option will appear to allow cutting the root. Use the root cutting on the plant pot. With a bit of luck it will grow.

If the cutting does not grow, dig up and cut another root in a different soil spot. There are five spots to dig in (two northeast of the trunk, one north of the trunk, one west of the trunk, and one off in the corner to the southwest of the trunk), and only one of those five spots will yield the root that will grow. Use the root cutting with the plant pot filled with soil. If it fails to grow you will retain the plant pot with soil. When the vine root cutting successfully grows, use your plant pot on your normal pot to end up with a sealed pot. That pot now contains the root. Be careful not to teleport until the root has grown and has been sealed in the pot. If the sealed pot is lost, talk to Garth to get another.

Go back to Ardougne, and talk to Horacio. Bring the root cutting sealed in the pot. The player must plant the vine in Horacio's vine patch, found northeast of Horacio with a gardening trowel. A tool leprechaun is nearby, for obtaining Farming tools if you already stored them.

After planting the vine, a cutscene appears where the jade vine has grown out of control. Horacio now insists that the vine needs to be killed. Fortunately, there is an opportunity to prepare for the battle. 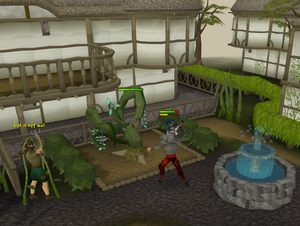 The wild jade vine uses all three combat styles so you cannot fully protect yourself with prayer, however its magic attack is much weaker and used less often than its melee attack. Therefore it is recommended to get magic defence, and then protect from melee. The vine's magic attack will poison for 70 damage (regardless of if it hits), so a dose of a super antipoison can be used to defend against it. The ranged attack is not a serious threat but it is recommend to still keep your health up as it occasionally hits up to 1000. The vine can only be damaged by a hatchet; a melee weapon can be used if the hatchet is on the tool belt.

It is recommended that you do not use a Prayer book. It will drain your prayer each time you use it, and the vine poisons quite frequently, causing you to waste a lot of your much needed prayer points.

If you need to leave, you can exit through the arch, but you will have to start the battle over again. After killing the vine, cut the last remainder of it using your secateurs.

Now talk once more to Horacio to complete the quest. 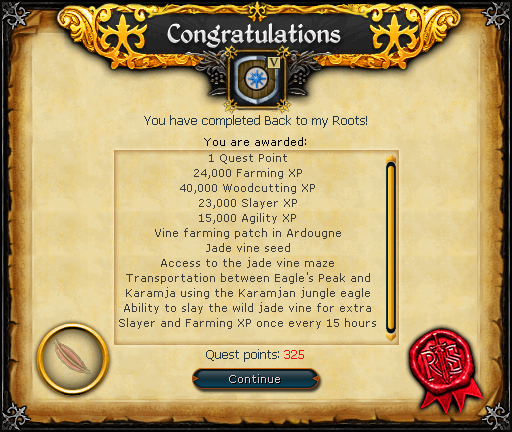 Back to my Roots is directly required for the following quests/miniquests: