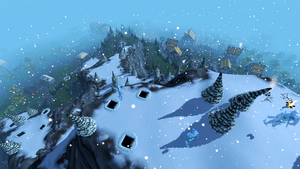 The summit of the mountain

The mountain itself is very dangerous to low-level players, however there are a variety of ways to go around. Once a player has completed the Fishing Contest Quest, a tunnel that travels underneath the mountain becomes accessible (although it requires them to cross the mountain otherwise at least once). This tunnel features a cart station that leads to Keldagrim. There is also various affordable teleportation jewellery that can land players beyond the mountain, including games necklace and ring of duelling, and a boat from Port Sarim to Catherby; Catherby has a lodestone so the mountain only needs to be 'crossed' once.

To traverse the exterior of the mountain:

To traverse the interior of the mountain (requires completion of Fishing Contest quest):

Throughout the White Wolf Mountain, level 8 Adolescent White wolves, level 16 wolves and level 30 white wolves roam about, aggressively attacking low-level players. A single level 43 Big Wolf also lurks about, proving deadly to some lower levelled players. These wolves are a convenient source of wolf bones used in various quests. Some players may set up a cannon at the peak of the mountain as it will hit many wolves on the mountain and very few can actually attack the players back. In the Ice Queen's Lair underneath this mountain and near its multiple entrances level 54 ice warriors, level 51 ice giants, and level 42 ice spiders can be found. At the end of the cave network is the Ice Queen.

The entrance to a series of dungeons are guarded by high-level ice warriors and ice giants. In this so-called Ice Queen's lair, the Ice Queen can be found, who plays a crucial role in Heroes' Quest.

The dwarven brothers Austri and Vestri have a tunnel underneath this mountain and grant access to it after the Fishing Contest quest.

A Gnome glider is located at the centre peak of the mountain and is accessible to players after they have completed The Grand Tree quest. 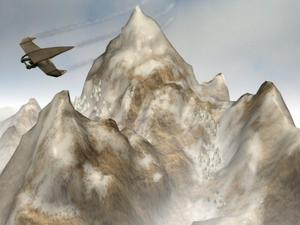 It is also the location of Grimgnash, a griffin who plays a central role in the quest Grim Tales.

The White Pearl is also found here, for the quest Mountain Daughter. Players need gloves to pick it from the Thorny bushes, or 40 damage would be dealt.

The dead druid from the quest Wolf Whistle is found at the mountain's eastern entrance.

Evergreen trees used for sap in Icthlarin's Little Helper and The Eyes of Glouphrie.

The mountain is also featured in Heart of Stone where the place is related to the elder god Wen.

Ways of getting around[edit | edit source]

Starting just north of Taverley bank, start going northwest, ascending the mountainside. You will see a fork. To the left is the Land of Snow portal; go right and follow the ledge, go past Grimgnash, until a cave is reached. Enter the cave to reach a higher part of the mountain. Go east, then south when you see ice warriors, until another cave entrance to the west can be seen (you will come across wolves and white wolves on the way). Entering that too will make the player appear on a lower elevation level. Walk south-east until Catherby beach is reached. If starting from Catherby, just move the opposite way.

The simplest and safest (if slightly expensive alternative) is to go to the eastern area of Port Sarim where there's a collection of ships. One ship will run a trading company and will offer to 'charter' the player to a port of their choice. Taking the trip to Catherby will get the player directly on the west or member side of White Wolf Mountain and will cost around 1,000 coins - however there is a lodestone in the area, so it only needs to be paid once before activating the lodestone and having a direct crossing from anywhere in RuneScape.

The boat network can also take the player to a variety of other places, such as Port Khazard near Ardougne.

There is a mithril grapple Agility shortcut located at the entrance of the mountain (when coming from Catherby) that requires 35 Strength, 35 Ranged, 32 Agility, and the completion of the Fishing Contest quest. This shortcut, however, can only be used when travelling from Catherby to Taverley. 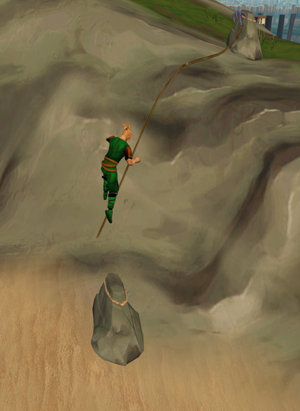 At the location of the mithril grapple Agility shortcut, There is a option to create a "Hidey-hole".

The Fishing Contest quest also unlocks a two-way underground passage that has no skill requirements that is little different in length to the above-ground route but does not have wolves and is safe for low level players.

Each end is guarded by a dwarf. Austri on the east and Vestri on the west. Other dwarves occupy the tunnel itself.

There is a Mine cart tunnel to Keldagrim next to the bar (south of the east stairway).

There is also a dwarven bar, with Dwarven stouts on the tables for free, which has the following NPCs:

To lower level players who are not yet capable of teleportation or fending off the creatures of White Wolf Mountain, the passing may seem impossible. However Magic tablets can be used by anyone to teleport to different locations past the mountain, such as Camelot and it is possible to use a charter ship to reach any of the cities on the other side. Players can also teleport using the lodestone network after activating the Taverley or Seers' Village lodestones.