From the RuneScape Wiki, the wiki for all things RuneScape
(Redirected from Robes of Subjugation)
Jump to: navigation, search
For other variants of this item, see lucky.

The robes of subjugation are a full set of Magic power armour that requires 70 Defence to wear. It is dropped by K'ril Tsutsaroth and his bodyguards in the God Wars Dungeon. The robes are non-degradable, and they are the Magic equivalent of Armadyl armour and Bandos armour, which are respectively ranged and melee power armour sets. Presently, the robes are less expensive than Armadyl armour but more expensive than Bandos armour. It is also the second highest-level non-degradeable Magic armour set in the game, having been upset by the Anima Core of Seren.

Unlike Armadyl and Bandos armour, the robes of subjugation did not exist at all before the God Wars expansion on 5 September 2012. They were added to enhance K'ril's drop table and give Magic an offensive armour set.

Because the robes are strong, do not degrade, and have a Magic bonus, they are in demand and considerably more expensive than Ahrim the Blighted's equipment or even ganodermic armour, which both have higher defensive bonuses. The robes of subjugation are most often used for training combat and Slayer, and for fighting bosses at higher levels. 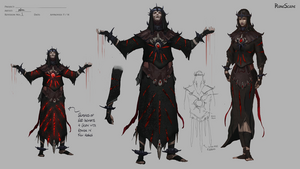 Concept art for the robes of subjugation

Not long after Zamorak achieved godhood, he became worried about his followers, who were not loyal to him and were planning to betray him the same way he did with Zaros. Seeing that, he visited Razulei in the Infernal Dimensions and requested the creation of the robes of subjugation, powerful robes imbued with cruelty. After they were created, Zamorak paid Razulei handsomely and gave them to his mages. Any mages who drew power from the clothes with the objective of overcoming him were flooded with pain. Desperate to cease it, they drew even more power from the robes, but it only worsened the pain and, eventually, killed them.

After Zamorak's banishment, his followers that wished to return him to Gielinor were loyal, so they could use the power of the robes not only without succumbing to pain, but prospering in the name of Zamorak.