Item Lending is a feature released on 14 July 2008 that allows all players (free and members) to lend their items to friends for up to 72 hours, or until either player logs out. Jagex first announced the development of Item Lending on the 17th of December, 2007 in its Future Changes to Recent Updates article. On 29 July 2008, Item Lending was updated so that players needed to send a trade request to lend an item. Doing this will open the trade interface, where players can right-click on an item and choose to "Lend" it. This update was introduced by Jagex to prevent players from scams via trust trading, and also because the unbalanced trade restriction prevented players from lending some items. 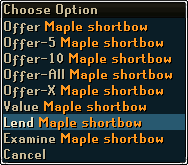 To lend an item to a player, one needs to send a trade request to the other. Once the trade interface is open, the item can be lent by right-clicking and choosing the "Lend" option. This will put the item into the "Loan" box, showing the item is kept by the player.

The default loan duration is "Until log-out", but this can be changed by clicking on the button and typing the desired duration (between 1–72 hours) for the loan. If the player wished to lend the item until either player logs off, the duration should be set to "0" (zero) or click until it says "Until Logout".

After setting the duration, both players need to accept the "trade", and the item will be transferred to the other player. Some players rent certain rare items (ex. godswords and partyhats) and may make a considerable amount of money from it, and renting may even end up paying for the item after a few hundred "rents." 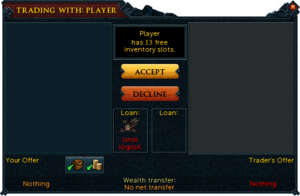 When an item is offered in the trade interface, the lent item will appear in the "Loan" box and the loan duration will be shown just below the item. The borrower may choose to lend another item in return, or offer coins for the loan of the item. However, this is not required, as the item can be borrowed free. Once both players have accepted the trade, the item will be lent to the borrower.

When borrowing an item, to find out how long you have left before the item is returned, unequip the item and use the discard option. The result will display in a dialogue over the conversation pane.

Any item traded in return for a lend will not be refunded when the borrowed item is returned to its original owner. Borrowed items also cannot be used in the photo booth south-west of Falador, and they cannot be turned into a cosmetic override using keepsake keys.

The item being borrowed will be protected above all other items, even if the item is lower in terms of value compared to other items. If the player is unable to retain any items , then the item is returned to the lender.

A player may discard an item (unwield, right-click and "discard") that is no longer required. A dialogue box will appear to show the remaining time and also give the option to discard the borrowed item. If an item is discarded, neither player will have access until the time is up, when it will be returned to the lending player in the usual way. After discarding, a player is able to borrow another item immediately.

Chatting with the banker will enable the collection of borrowed items, similar to the collection from the Grand Exchange. The option to choose is "I'd like to see my Returned Items box." Doing this will bring up an interface that shows the borrowed item which needs to be collected.

With the Item Lending Update, items may be collected from wandering bankers such as those outside minigames like Fist of Guthix.

When lending items out for a specific duration of time, the player cannot reclaim the item they lent out under any circumstances until the specified time limit is over. If the "Demand" option on the item in the Returned Items box is chosen, the player will be prevented from doing so and told how much time is remaining until the lent item can be retrieved. This is also the case if the borrowing player 'Discards' the item before the time is up; the full lend duration must lapse before the item's owner can reclaim the lent item.

If the player chooses to "Demand" their lent item while it is lent until logout, then the item can be immediately reclaimed.

Any Bank chests that allow the player to collect items from the Grand Exchange will now allow lent items to be reclaimed.

Using an item on the rightful owner also returns the item. This only works for "until log out" situations. Before 3 February 2011 this action returned the item directly to the inventory. Because the exploit of this feature led to a new type of Lend Until Logout Scam, the item is now always returned to the owner's item box.

Wilderness and Free For All Dangerous Clan Wars area are the only places where lent items cannot be taken. If the player has a full inventory and leaves the Chaos Temple dungeon where the armoured zombies are located to recharge prayer, the item will be sent to the bank and stored there, even if the bank is already full.

Some of the places items cannot be lent or borrowed in are:

All borrowed items have a red symbol added to the item to differentiate between the borrowed item and the other regular items.