The crystal ward is a powerful shield available after a player completes the Roving Elves quest, and a possible reward from this quest along with the crystal bow. To wield the crystal shield, a player must have 70 Defence and 50 Agility.

Before the release of Prifddinas, this item was called the crystal shield. Upon the redesign and overhaul of crystal equipment, this item was renamed and made unusable. Players however can convert this item into the newer crystal ward at no cost by using the re-attune option. 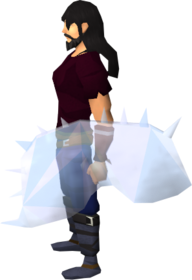 The crystal ward degrades over time. When a player obtains a new crystal ward, it will be a "New crystal ward". However, after receiving 2500 hits, it degrades into a "Crystal ward 9/10", and for every 2500 hits taken thereafter it will degrade another 1/10th, until it reverts into a crystal seed after a total of 25,000 hits taken.

Once a crystal ward runs out of charges, it turns back into a crystal seed, and must be recharged before it can be used again. Ilfeen will recharge crystal seeds into crystal wards or crystal bows. She can be found teleporting back and forth between two clearings in Isafdar. (From the lodestone, take the northeast path, jump over the leaftrap, go to the end of the path, then turn left to go through the dense forest. You'll see the musician, and keep going northeast. You'll see another leaf trap, but just before it, you should go left through some trees, then around a fallen tree on the ground, and go north to the clearing. She'll be there, or if not, wait a few minutes and she will be). However, players who have completed The Prisoner of Glouphrie can also find her in the centre of the elven village Lletya.

Initially, Ilfeen charges 750,000 coins to re-enchant a crystal seed into a crystal ward. However, the price is decreased by 150,000 coins each time Ilfeen re-enchants a seed for a player, in the following manner, until reaching the minimum recharge cost of 150,000 coins:

Ilfeen is also able to re-enchant partially degraded crystal equipment, at a proportion of the cost. For example, a Crystal ward in '9/10' condition can be recharged back to full condition for 15,000 coins if the minimum recharge cost has already been reached. A recharge this way will also count towards reducing the cost for future re-enchantments.

A crystal ward with 2/10 charges is a possible reward for completion of Roving Elves. Additionally, players can buy new crystal wards from Islwyn for 750,000 coins each. Unlike Ilfeen's recharge price, the price of a new crystal ward does not decrease.

As crystal seeds are tradeable, players can buy them from other players or the Grand Exchange and pay Ilfeen to re-enchant them into crystal shields.

Those wishing to get rid of their non-new crystal wards while recouping some money face a difficult problem: it cannot be alchemised, cannot be traded, unlike other degradable equipment cannot be repaired and then traded or instantly degraded by dropping it or dying with it, and unlike other crystal items has no right click "Revert to seed" option. Even dying in the wilderness with it does not give the other player any gold, so doing that with a friend isn't an option either. The best solution is to equip the shield and nothing else and enter an area with many aggressive enemies, such as dagannoths or the Abyss, to intentionally degrade it quickly. Alternatively, enter a dark area such as the Lumbridge Caves without a lightsource.