From the RuneScape Wiki, the wiki for all things RuneScape
Jump to navigation Jump to search
The Old School RuneScape Wiki also has an article on: osrsw:Ancient wyvern shield
For other uses, see Dragonfire shield (disambiguation).
For this item's augmented variant, see augmented dragonfire ward.
Dragonfire ward? (edit)? (edit)

The dragonfire ward is created when combining a Draconic visage with an Anti-dragon shield and choosing to forge it towards magic. Requiring 70 Defence to equip, it is one of the most powerful shields in RuneScape. Much like the anti-dragon shield from which it is made, the dragonfire shield provides partial protection from dragonfire attacks; however, it also provides the same partial protection from the ice breath of Skeletal Wyverns that an elemental shield or equivalent would offer. It also has identical stats to the Ward of Subjugation and the Crystal ward, except for the Dragonfire protection and the prayer bonus.

The dragonfire ward cannot be lent. Additionally, it can only be traded when completely uncharged. 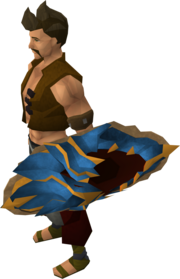 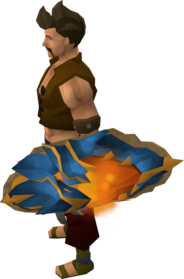 A player converting the Dragonfire shield to another combat class

The dragonfire ward is created by attaching a draconic visage to an anti-dragon shield at any anvil. The process requires 90 Smithing and a hammer, giving 2,000 Smithing experience and an uncharged dragonfire ward. There are 3 types of dragonfire shields you can smith, you will be given the option to choose either melee, range or magic. Players who do not have the required Smithing level to make the ward may seek help through the Assist System; alternately, Oziach in Edgeville will smith the ward for any player at a cost of 1,250,000 coins.

It is possible to change between the different uncharged versions by using the dragonfire ward at the dragon forge located in the Ancient Cavern. Before the mining and smithing rework, a blast fusion hammer, which costs 1,000,000 gp, purchaseable from the Blast Furnace Foreman was required.

The draconic visage is dropped by most high-level dragons, including black, iron, steel, mithril, frost, and celestial dragons, skeletal wyverns, and the King and Queen Black Dragon. However, green, blue, red, bronze, brutal green dragons, and all baby dragons do not drop the draconic visage.

The Dragonfire ward's special attack has a few interesting attributes:

A player charging the dragonfire shield.

To charge the dragonfire ward, simply equip the ward and attack any dragon capable of breathing dragonfire. With the use of an antifire potion, no damage will be taken. There are several ways to charge a dragonfire ward in complete safety.

Players who do not have such options available can also charge the ward easily using one of the following:

A player emptying all charges.

Players can drain all of the dragonfire ward's charges at once by right-clicking the ward in the inventory and selecting Empty. This will release all of the ward's charges in a harmless burst. This function is useful when selling or trading the ward, as it can only be traded when completely uncharged.

Also, if dropped on death in an unsafe environment, when recovered the dragonfire ward will be completely uncharged.

When bought or smithed, the ward will be uncharged. A partially charged Dragonfire shield will have the same defensive bonuses as a fully charged shield.