From the RuneScape Wiki, the wiki for all things RuneScape
Jump to: navigation, search
The Old School RuneScape Wiki also has an article on: osrsw:Seercull
Seercull? (edit)

The seercull is a Fremennik bow, requiring a Ranged level of 50 to wield. It is a unique weapon within its tier, as it has level 52 bonuses. The attack range of the Seercull is 7 spaces.

The bow's name can be attributed to the combination of the words seer (another word for "mage" or "wizard") and cull (another word for "kill"). This is consistent with its examine information, which states that the bow was used to kill mages of the Moon Clan, and its special attack which affects the target's Magic level.

The Seercull is obtainable only as a rare drop from Dagannoth Supreme, or by buying it from another player. It is not commonly seen amongst players due to the magic shortbow being much cheaper, easier to obtain, and having a higher damage rating (albeit with less accuracy and a slower speed). The elder shortbow offers both superior damage and accuracy. 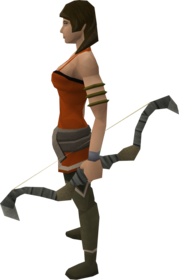 The Seercull's special attack is called Soulshot, which fires a shot dealing 20-100% ability damage, and lowers the target's Magic level based on the damage dealt. This special attack uses 60% adrenaline.