Sea Slug is the first quest in the Sea Slug quest series. Strange sea slugs have taken over the villagers of Witchaven with their mind control powers. Caroline, a Witchaven villager, worries about her husband and son, who have not returned from the Fishing Platform yet, and tasks you with finding and returning them to the village.

Something strange is happening on the Fishing Platform.

Missing fishermen and the presence of dozens of strange sea creatures gives cause for concern.

Investigate the platform and discover the truth before it's too late. 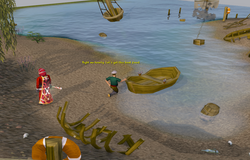 Holgart repairing his boat with the swamp paste.

Talk to Caroline in Witchaven, east of East Ardougne. She can be found by the transportation symbol. She tells you that her husband, Kent, works on the Fishing Platform and that once a month, he takes out their son, Kennith, with him. Usually they write back to her, but she hasn't heard anything from them for a week. Also, no one has any contact with the other fishermen on the platform. She asks you to go to the Fishing Platform to find out what is going on and that Holgart can take you there.

Talk to Holgart, who is walking around near Caroline. He tells you his ship is in need of repairs and that he needs swamp paste to fix it up. Give Holgart the swamp paste, and you see a short cutscene of him patching up his boat. Talk to him again to travel to the Fishing Platform.

Once you arrive at the platform, notice the odd behaviour of the fishermen, who wobble around in zombie-like trances and speak in broken sentences. If you try to pick up one of the sea slugs on the platform, it bites you dealing 30 life points of damage.

Head west on the platform to the small room and speak with Bailey, the keeper of the Fishing Platform. Bailey tells you that about a week ago, they hauled a batch of deep sea flatfish mixed in with the abundant sea slugs, but thought nothing of it at that moment. Oddly, the fishermen spend all day netting, only to throw back the fish and keep the slugs. Before you leave, take the broken glass for later use.

Head to the north-east corner of the platform, and pick up some of the damp sticks near the ladder. Take the ladder upstairs and head west, past the crane, into the room with Kennith. Talk with Kennith, who is hiding behind some stacked crates. 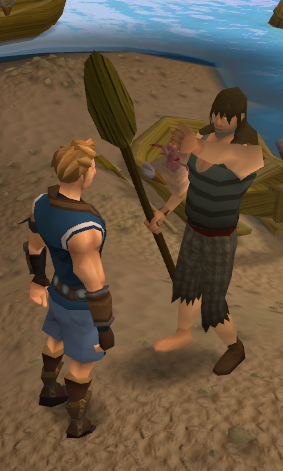 Kent pulls a Sea Slug off you.

He tells you that his father, Kent, went to go get help and told Kennith to hide in the room away from the fishermen. Go down the ladder to the ground floor[UK]1st floor[US], and head back to the south-east corner of the platform, where Holgart is waiting. Talk to Holgart about what you have seen. He mentions that Kennith's father left for help a couple of days earlier, and takes you to a small, deserted island, where you find Kent, all alone. Talk to Kent, who tells you about the sea slugs taking over the minds of the fishermen. He tried to alert everyone by sailing back, but his row boat wasn't seaworthy and he couldn't risk his son's life on the trip.

Before leaving, he pulls a sea slug off you. Ask Holgart to take you back to the platform to rescue Kennith. 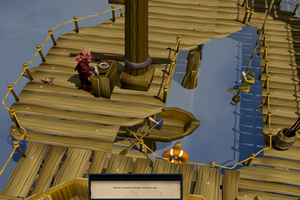 Lowering Kennith with the crane

Back at the platform, try to climb up the ladder again. The slug-controlled fishermen smacks you on the head, for 40 life points of damage, to stop you. Head over to Bailey in the south-west corner of the platform, and talk to him. He informs you that the slugs are scared of heat and gives you an unlit torch.

Use the broken glass on the damp sticks (by the ladder) to dry them in the sunlight and make dry sticks. Choose the dry sticks' "rub-together" option to light the torch. With the lit torch in your inventory, climb up the ladder, go in the room again, and talk to Kennith, who refuses to leave with you, still scared about the fishermen.

Go outside the house, and kick the badly repaired wall, just north of the door and east of where Kennith is hiding. Go back in the room, and talk to Kennith. He tells you he will come out when you figure a way to get him downstairs. Go to the crane just outside the room, and choose "rotate crane" to pull Kennith to safety, as shown in a cut scene.

Kennith will grab the hook of the crane, and as the crane is lowered, he will get off safely onto Holgart's boat. After Holgart returns from transporting Kennith back to Witchaven, speak with him. He ships you back to shore. Finally, return to Caroline to finish the quest. 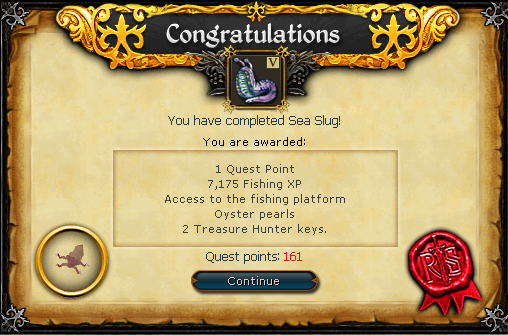 Sea Slug is directly required for the following quests/miniquests: