From the RuneScape Wiki, the wiki for all things RuneScape
Jump to navigation Jump to search
The Old School RuneScape Wiki also has an article on: osrsw:Mother Mallum
Mother Mallum? (edit)Mahey'ish MedronSlug Queen? (edit) 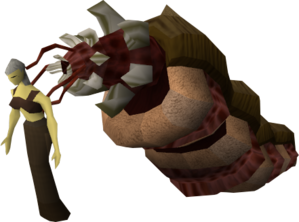 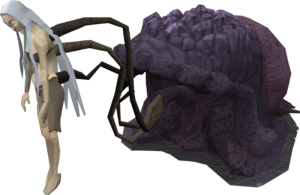 Mother Mallum is the ancient and malevolent queen of the sea slugs and resembles an enormous mollusk. She is described by the Temple Knights, whom she has fought, as a great evil due to her and her slugs' ability to attach themselves to someone's neck and take over their mind, effectively turning their victims into mindless servants that do Mother Mallum's bidding. The victim's skin also turns to a sickly yellow colour, and longer possession results in certain "aquatic" features, such as gills and fins, developing. If freed from possession, the victims are unable to recount what had happened, and their mind is left in its state prior to the possession. She attempted to achieve global domination on Gielinor in the late Fourth or early Fifth Age, having accomplished this in other worlds,[2] by possessing various important political figures, but this plot was narrowly stopped by the Temple Knights. She was imprisoned, but escaped in the Fifth Age, when she was permanently defeated, ending the Sea Slug Conflicts.

Mother Mallum is unable to communicate with non-slugs without a host. Unlike her spawn, she is large and powerful enough to carry her host, suspended by tendrils protruding from her mouth, rather than vice versa. Her last host was originally a small girl named Lucy, but her body aged over many millennia,[3]though her mind remained the same due to her possession. Mother Mallum is cruel and confident, deeming her plans impossible to fail, and sometimes refers to herself in plural, a trait shared by other slugs and victims. Aside from the mind possession, Mother Mallum is capable of telepathy and telekinesis, and perhaps other types of magic as well, for she is known to be able to cast teleportation blocks.

How Mother Mallum came to be is unknown and the earliest records of her are the Temple Knights' HQ, which cannot have been written earlier than the middle to late Third Age. However, the Slug Queen is known to be older than that, due to the fact that she invaded realms before Gielinor.[2] 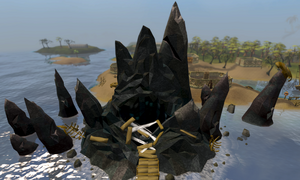 The massive citadel of the "Great Mother".

At an unspecified date in Gielinorian history, described as "centuries ago", Mother Mallum emerged from the sea with an army of slugs. Mallum, who had set her plans to possess the important political figures of the world and thus rule it in motion, was fought by both a secretive military organisation known as the Temple Knights as well as the White Knights, a closely linked organisation who served the Temple Knights.[4] The White Knights suffered massive losses, losing many men to Mother Mallum's mind control, whom she took with her to her base of operation: a large submarine fortress known as the Slug Citadel, located off the coast of what is now Kandarin (more precisely, east of Ardougne). 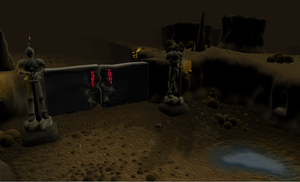 The Temple Knights' prison for the Mother Mallum.

The few knights that had escaped the slugs proceeded to devise a method to remove the possession, which succeeded albeit with great effort, before forming a plan to stop her - the Temple Knights launched a crusade to the Slug Citadel although they soon realised they would not be able to kill her, they fought the slugs and lured Mother Mallum into a cave. There, she was trapped and the knights magically sealed the cave with a door using modified runestones.[5] Mother Mallum was imprisoned and her slugs fled to the depths of the sea, while the Temple Knights marked their victory by building statues of their men which they placed near the door. Additionally, they wrote the name of the prisoner, "Mahey'ish Medron", on the door in glyphs.

The following takes place during Sea Slug, The Slug Menace and Kennith's Concerns.

Mother Mallum's second attempt at conquest would not commence until later, in 169 of the Fifth Age. At some point, the Kandarian government authorised the construction of a Fishing Platform off the coast of the small and quiet fishermen's village of Witchaven. The rich catch from the platform brought poverty to Witchaven, which had lost its only source of income. However, the fishermen soon began catching increasing amounts of sea slugs. These naturally possessed the fishermen, who, as a result, began hauling in only more slugs, while throwing all the caught fish back into the sea.[6] Eventually, nearly all the workers of the platform, aside from the timid keeper of the platform named Bailey, who discovered he could keep the hostile fishermen at bay using fire. Witchaven's mayor, Eustace Hobb, also fell victim to the slugs' mind control.

When the villager Kent and his son Kennith went to the platform, the sea slug invasion was first discovered. They found themselves unable to leave the platform, but were rescued by an adventurer who was sent by Kent's wife Caroline. Afterwards, the sea slugs quickly spread, taking over most of the villagers, aside from the families of Kennith, local priest Brother Maledict, the fishmonger Ezekial Lovecraft and, later, the newest residents: Kimberly and her family. Meanwhile, a retired but still semi-active Temple Knight colonel called Jake O'Niall noticed the increasingly strange occurrences and contacted the headquarters in Falador when he noticed the mayor, who "was about as religious as a dead dog on a termite mound", had suddenly decided to renovate the shrine to Saradomin just west of the village, bringing lots of mining equipment and, much more suspiciously, high amounts of rune essence in. The Knights' head of recruitment, Sir Tiffy Cashien, dispatched an initiate knight, who had rescued Kennith earlier, to Witchaven to investigate the situation. By this time, the slugs had possessed large groups of enormous lobsters, who turned very aggressive as a result. The green monsters proceeded to guard the path to Mother Mallum's prison. 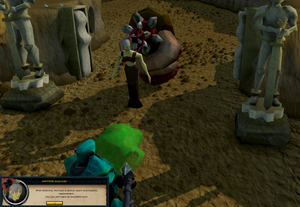 They reported to O'Niall and had Savant, the senior mystical researcher, scan the mayor, detecting two life forms (him and his slug), although she initially thought it was an error of the analysis. They then investigated the shrine and found the Temple Knight prison, not knowing what it was. They had it investigated and found out about the crusade and that Mother Mallum was inside. Soon after, the mayor placed a slug on Maledict's neck and commenced a plot to release Mother Mallum. The possessed priest tricked the initiate into repairing the Holy Book of Saradomin, which supposedly stated how to re-inforce the sealing enchantment. While gathering the book's lost pages, they also discovered that O'Niall had been possessed as well. The initiate repaired the book and performed the ritual, but was shocked when it actually opened the prison.

Mayor Hobb, now transformed into an aquatic creature, emerged from it and summoned the slug prince to kill the initiate, but the prince was slain. An enraged Hobb was then dismissed by Mother Mallum herself, who cast a teleblock to prevent Savant from rescuing the initiate. She attempted to discard Lucy and use the terrified initiate as her new host. As she was about to attack them, Savant managed to teleport the panicking initiate to safety. They reported to Sir Tiffy, who promoted them to proselyte and ordered the assassination of O'Niall.

A short while after, more villagers fell victim to the slugs' control and began excavating the subterranean rubium mines for reasons currently unknown, while stalking the village's new residents to join them. Mother Mallum herself retreated to the Slug Citadel to plan and had it emerge from the sea near the Fishing Platform, possessing Bailey while at it. O'Niall was captured rather than killed, but the Temple Knights found the slug could not be removed, having nested itself too deep inside his brain.

The following takes place during Salt in the Wound.

Mother Mallum's return put the Temple Knights in a state of red alert. Due to the details of their previous crusade and the removal of slug possession having been lost in a fire that ensued after a dragon crash-landed in their archives, they had their seers find a solution. They managed to pinpoint the ingrediente for an anti-mind control serum, which included an actual sea slug and, for some reason, the gland of a stalker known as the seeker of truth. Fortunately for them, this particular stalker had been brought to Gielinor by the Mahjarrat Bilrach and was now located beneath the quarantined fortress of Daemonheim, albeit deceased. Sir Tiffy contacted Kennith, who had mysteriously aged over a decade, and had a party set up to brew the serum and defeat Mother Mallum. This party included Kennith, Ezekial, Tiffy's niece Eva and aforementioned proselyte. 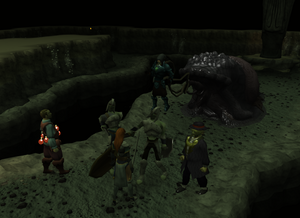 The party found all of the ingredients for the serum and managed to make it, before heading to the Fishing Platform. There, they entered the Slug Citadel and were forced to fight many undead White Knights who had been defeated during their crusade. They managed to reach Mallum's antechamber deep within the citadel and confronted her, along with Hobb and Maledict. Mallum seized the opportunity by finally discarding Lucy and took the proselyte as her new host, although she had difficulty controlling their strong mind. She then summoned two undead knights to kill the others, but Eva took them, along with Hobb, on on her own.

Meanwhile, Ezekial and Kennith made their way to a side-tunnel and threw the serum at Mallum, weakening her control over her minions and causing her to back away. Eva then punched a furious Hobb knock-out before attacking the Mother. The latter magically grabbed Eva in a rage and threw her away, causing her to hit a conveniently placed, massive statue resembling a pillar behind the slug. Eva weakened the statue's base further and, as a result, it fell forward, crushing Mother Mallum. Her body exploded in a fountain of guts, ending her reign once and for all. All the people she had possessed returned to normal, while Lucy died of exposure, old age and exhaustion, remembering everything as a nightmare. The Slug Citadel remained near the Fishing Platform, albeit uninhabited.