Kennith is a boy, later a man, who lives in Witchaven with his parents Kent and Caroline. He has some sort of magical power which allows him to influence the weak of mind.[1] As a child, he went to the Fishing Platform with his father once a month, writing back to his mother regularly.[2] There, a fisherman named Bailey helps control him and his powers.[3] He doesn't understand how his magic works as it is as natural as breathing to him.[4]

He is very demanding and hard on his parents, getting upset over things like them talking to other people.[5] This places a great strain on his mother in particular, to the point where Kent has to take him away at times.[6] He is also prone to extreme measures when upset, terrorising fellow Witchaven resident Kimberley for losing his favourite toy, through the likes of enslaving the locals, abducting her parents Clive and Katherine, and attempting to destroy her home.[7] He is also willing to taking action against those he believes to be conspiring with his enemies.[8]

He has trouble remembering names, referring to Sir Tiffy Cashien as various similar sounding words, such as "Tipsy".[9] He appears to have trouble getting along with girls, getting into feuds with Kimberley and Eva.[10] He admires the adventurer, despite initially antagonising them. [11]

One time when Kent took him out to the Fishing Platform, the fishermen caught some sea slugs. The slugs infected the fishermen, who then became obsessed with obtaining more slugs.[12] They also tried to drown Kennith and Kent, but failed. Kent told Kennith to hide then went to get help. Due to them not contacting the mainland, Caroline sent an adventurer to investigate. They located Kennith hiding on the platform and found Kent washed up on a nearby island, then tried to get Kennith off the platform. He refused to leave, as he didn't want to go anywhere near the slug-infested fisherman. The adventurer created another exit and handed Kennith over to Holgart, a local sailor, who returned Kennith and Kent to Witchaven.

His friend Kimberley lost his toy train, which upset him. He began focusing on revenge, utilising his magical powers to harass and torment Kimberley and her family into leaving Witchaven. When his plot was foiled, he went to the Witchaven mine to confront the adventurer. He captured Kimberley and trapped her in an energy bubble, and started emitting sparks. The adventurer found his toy train located somewhere in the village and gave it to him, and he calmed down. Kimberley's family moved down into the mine, believing it to be safer than Witchaven, while Kennith was sent to the Fishing Platform, where he helped Bailey deal with the sea slugs.

He came to realise his behaviour over the lost train was rather immature and decided to grow up, literally.[13] He searched for the adventurer who had helped him, eventually ending up in Falador. He stopped in Falador Park and met Sir Tiffy Cashien. The Temple Knights then recruited him to defeat the slug menace once and for all, claiming his powers would be useful, and tasked him with creating an anti-mind control serum. He summoned the adventurer, Ezekial Lovecraft, and Eva Cashien to Daemonheim. They broke into the place, accidentally killing Elfinlocks, and sought out a Seeker of Truth to take a seeker gland from. One of the party had to sneak past a caustic gazer, and Kennith was either chosen to deal with it or grumbled when he wasn't chosen. Once they obtained the gland, he teleported them all to the Fishing Platform, despite Eva's objections. He returned to find Bailey, lacking his protection, had been captured and enthralled by the slugs. The adventurer tricked Bailey into giving them his blood, which was the other ingredient required for the serum.

They broke into the Slug Citadel, where Kennith used his mind controlling powers to convince the thralls he wasn't there. The four of them worked to reach Mother Mallum, avoiding her thralls and dealing with the zombified white knights that she raised. Kennith and Ezekial took the serum while Eva dealt with the risen knights. The adventurer, however, was taken by Mallum. Kennith used his magic to force Brother Maledict to let him pass and, along with Ezekial, applied the serum. Eva then toppled a pillar, killing Mallum and freeing all of those she had enslaved, including the adventurer and her previous host, Lucy.

Afterwards, he realised that he enjoyed the adventuring life and expressed a desire to see the Wizards' Tower. He also considered seeing if the Temple Knights would give him more work.[14]

Nope, that's a job for you. 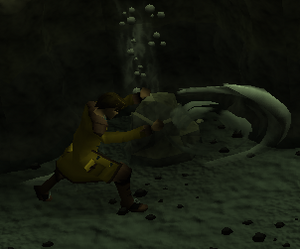 Kennith's Theme
The music that plays when Kennith captures Kimberly during Kennith's Concerns. It is a remix of A New Menace.

Kennith's Theme
The music that plays after Kennith is pacified during Kennith's Concerns. It is a remix of A New Menace.