From the RuneScape Wiki, the wiki for all things RuneScape
Jump to navigation Jump to search
For the achievement, see Kennith's Concerns (achievement).

Kennith's Concerns is a members quest that takes place in Witchaven. You must investigate the strange occurrences that have been going on in Witchaven and assist a child named Kennith.

As ever, there are strange occurrences afoot in the sea slug-riddled town of Witchaven. Kennith, the child rescued at the end of the Sea Slug quest, is convinced that the usually peaceful (albeit gastropod-possessed) locals are up to no good in the caverns under the village and asks players to investigate. Beware: not everything is quite what it seems.

Return of the Slugs?[edit | edit source]

Talk to Kennith, located in the house immediately west of the church in Witchaven. He will inform you that the slug-possessed villagers are again digging in the shrine and will ask you to investigate. Climb down the old ruin entrance immediately west of Kennith, and then go through the wall opening on the east wall as soon as you enter the ruin. 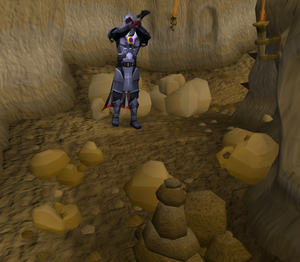 You are nearly hit by falling rocks.

From there, head east to enter a twisting tunnel. Make your way to the end of the tunnel; an agility shortcut is available. Climb over the rocks, and then talk to one of the villagers guarding a dark entrance. The villagers will eerily explain that they are again working and want the fruit of their labour to be a surprise for outsiders.

Make your way back to Kennith. As you climb back over the rocks, you will nearly be hit by falling rocks.

Once back with Kennith, you will find him acting strangely, having lost all interest in the shrine and sea slugs; instead, he wants to find his parents. 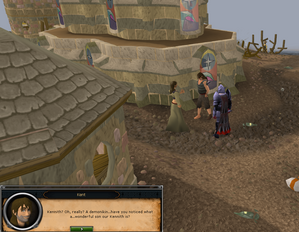 Kent and Caroline can be found behind the church, acting strangely.

Make your way to Kennith's parents, Kent and Caroline, located outside the east side of the church, and speak with them. Your conversation with the parents is odd. Kent will then stop talking, slip you a note, and run off.

Read the note, which asks you to meet Kent at the entrance of the Legends' Guild because he finds it difficult to talk openly in Witchaven. Walk to the Legends' Guild north of Witchaven, and talk to Kent. He will explain that Kennith is a demanding son and is worried that Kennith may be seeking revenge on Kimberly, a new girl in town, for losing his favourite toy train. He will ask you to check on Kimberly to make sure she is safe.

If you log out during this section, the villagers will reset and Kimberly will return to her house. You will have to start the process over from the first set of villagers. 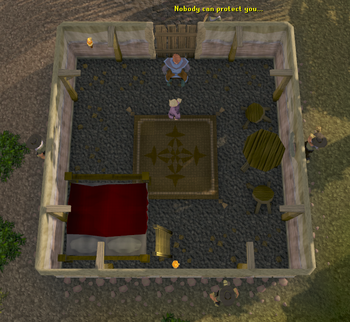 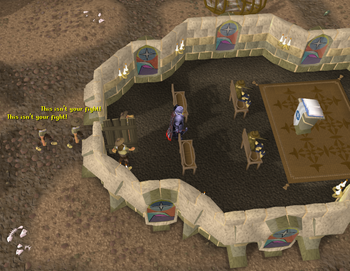 A player luring hostile villagers into the church.

Return to Witchaven, and talk to Kimberly, who is in the northernmost house in Witchaven, near Jeb. She will explain that villagers have been surrounding her house chanting her name and that she has been hearing banging and digging noises below her house.

Agree to accompany her around town to look for her parents, who have gone missing. A cutscene will occur in which the villagers surround her house, demanding that she come out to play. Kimberly will ask you to act as bait to lead the villagers to the church and then lock them in. She believes that the power of Saradomin will calm them down, which appears to be true, as the villagers eventually sit peacefully in the pews after they're locked up.

Run around the house to get the four villagers following you, and then head to the church. They won't attack you but easily get stuck behind obstacles. Get them all in the church, then run out and close the door. Now talk to Kimberly and follow her to Kennith's house.

Follow Kimberly to Kennith, directly west of the church. Talk to Kimberly, where she will then begin talking to Kennith about the disappearance of her parents and ask if Kennith has seen them. Kennith will deny having seen them, and mention that his own parents are "indisposed" at the moment. He will deny that he is worried about his missing parents. Kimberly will then ask if you hear something outside. A cutscene will play showing that the villagers have escaped, and she will ask you once again to get rid of the villagers. Lead them back to the church, closing the door again to keep them inside.

Talk to Kimberly and follow her to Ezekial Lovecraft, at the fishing store. Again, talk to Kimberly to start the dialogue with Ezekial, who will reveal that the new caverns in the shrine lead under Kimberly's house. Ezekial offers to allow you into the guarded area in the shrine, as he is recognised as one of the villagers.

Talk with Kimberly. Then head to the old ruin entrance and, as before, make your way back to the guarded shrine entrance. Ezekial will be waiting for you there. Talk to Ezekial and then to one of the two villagers, and you will be let in. This intermediate room has two doors: the metal one is locked. Talk to Ezekial once more. He will ask you to travel through the cavern behind the wooden door to unlock the metal door.

If you log out during your trip through all of the rooms, don't worry: You will be able to just run right through them without having to sneak around so long as you have stunned the villagers by putting rubium in the vents. 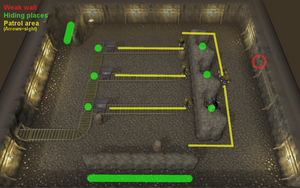 Go through the wooden door. You will be in a large room, which looks like a minigame. Your goal is to prospect the far wall and break through it, without being seen. If you get caught, the villagers will "roughly drag you to the entrance and throw you out of the room," so be careful.

Your first move once inside can either be to hide behind one of the minecarts or to run and hide behind the wall in the south. If you plan to go the whole way, you will need to set off just as the last miner has turned to face in the other direction; otherwise, you will be spotted and thrown out. If you only get to one of the minecarts in the first stage, make sure that none of the miners is looking at you, and then dash behind the southern wall, watching that you don't position yourself directly on the eastern end since you can be seen from that position.

Once you are hidden behind the southern wall, make your way into one of the three alcoves opposite of the wall you will prospect to the east.

Before moving to the wall to prospect, make sure all the miners are facing in the direction of the carts and you are standing as far away from them as possible by the eastern wall. The wall in which you should prospect is the on the north side of the east wall, across from the middle alcove. Do this when the two miners who could potentially see you are facing away. After prospecting, quickly making your way back to the hiding space. Wait until they have come back to stand in front of you and head away again, then mine the rock that has been prospected and quickly enter the gap.

You will find Kent and Caroline in here. Talk with them, and they will blabber about Kennith and how the slugs are doing great work. You see they will be of little use helping you with your task. Speak again to Ezekial. He will tell you about rubium and give his suggestions on how to traverse the second room.

Walk through the wooden door. This time you are in a room with four minecarts, with the villagers carrying material between the carts and the centre pillar. Your task is to mine four rubium and put it in the steam vents. Make sure to have run mode on. The steam vents are one-click, so you don't need to first click the rubium in your inventory to put it in a vent. The rubium may also combust, sending you out of the room. If that happens, just reenter the room. There are likely many successful methods, but here is one (each instruction must be done when the villagers are all close to the centre pillar): 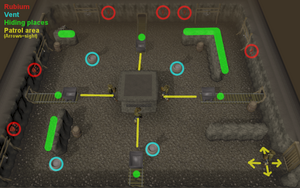 A map for navigating the second room

An active sign of the porter will bank your rubium. Make sure to unequip one if you have it or you will be unable to complete this section until it depletes.

Talk to Ezekial in the next room to get advice about the third room. 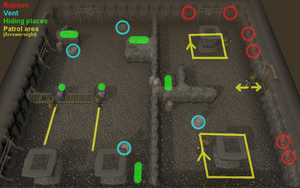 A map for navigating the third room

You may need to switch your video tools section to high definition to access the rubium in the north-east, as otherwise the minimap will obscure this area.

Enter the wooden door to end up in another rubium-filled room. Again, there may be many successful methods, but here is one (of course, making sure that the villagers aren't facing you when you move into view). With run turned on: 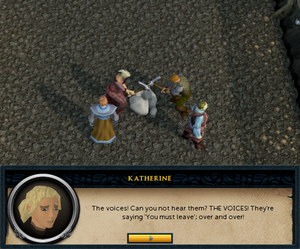 Chatting to Clive and Katherine

Proceed through the east door to a room with Kimberly's parents (Katherine and Clive) and Ezekial, and talk to them. They tell you to find Kennith. 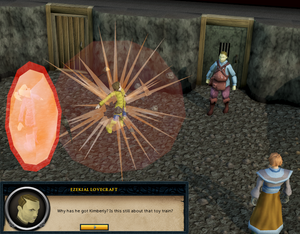 Exit through the door, and retrace your steps back through the rooms, past the villagers and Kennith's parents, until you return to the tunnel with the mine tracks. Follow the tracks back to the metal door opposite the lever you used earlier. Pass through the door.

Talk to Kennith, who is in the room. A short cutscene will occur, in which Kennith reveals that he enslaved the villagers, kidnapped Kimberly's parents, and tried to crush you with rocks all as a scheme to get revenge on Kimberly for losing his toy train. Kimberly will be floating in an "energy bubble" with Kennith hovering near her, shooting off sparks. 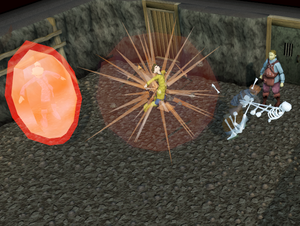 Kennith will electrocute you if you attempt to talk to him.

Talk to Kimberly, who will give you the location of the toy train. Make your way back to town to the train's location. This location varies from player to player.

Find the train in the area that Kimberly specified, and pick it up. It will be lying on the ground, but no red dot will appear on the minimap, so look carefully. If you can't see it, try turning off textures and ground decoration in your graphic settings, as this will make it stand out more.

Return to the room with Kennith and Kimberly, and use the train on the boy, calming his demonic rage and freeing Kimberly. You will see one final cutscene. The seemingly normal Kent thanks you for your "heroic" act, as does Ezekial. 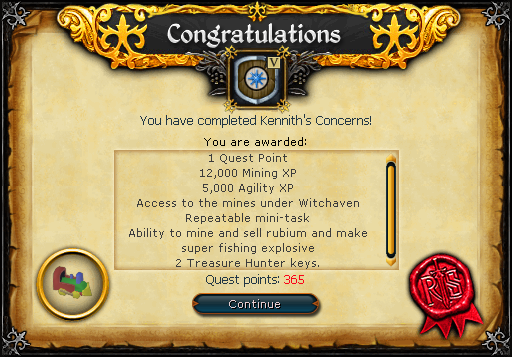 If you talk to the parents of Kimberly, they are at the end of the cave (where you found them mining in the quest), they will ask you to fetch an item from the surface. The items that may be requested are listed below:

The player will receive 2 noted coal stone spirits in exchange for the item. The requested item cannot be noted. By equipping leather boots and an iron hatchet, the player may bring 2 spades, hammers, tinderboxes and leather boots, and 3 of each other item, and an extra of the item last requested. This will generally yield 30-36 coal stone spirits per trip. However, as it takes several minutes to reach Kimberly from the south-east bank in Ardougne, players may find it more worthwhile to simply mine coal. 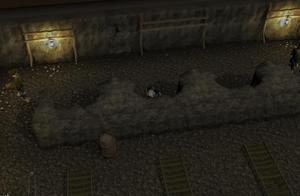 A different view of the mines. The crack is clearly visible now.
Retrieved from ‘https://runescape.wiki/w/Kennith%27s_Concerns?oldid=35955495’
Categories:
Hidden categories: