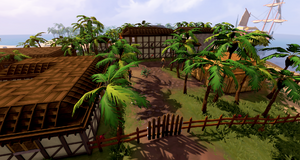 The entrance gate to Brimhaven

Brimhaven is a pirate town located in north-western Karamja and is only accessible to members. There are several ways to get to Brimhaven, the quickest being the House Teleport spell, assuming the player's house is in Brimhaven. More ways include teleporting to the Karamja lodestone, the charter ships, the amulet of glory teleport to Musa Point, or via the ship from East Ardougne (requires 30 coins). 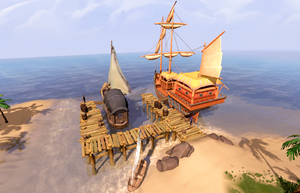 The docks of Brimhaven. 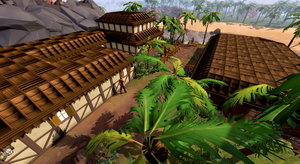 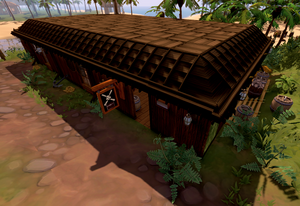 Brimhaven is home to the Agility Arena where players test their Agility levels in a dangerous area. The arena is safe to traverse with a good supply of food.

The player can grow fruit trees and spirit trees in the farming patches close to the harbour and the cart transport location. The island also has six pineapple plants near the house portal, and it is the only place where the player can find Strange Plants.

The Brimhaven dungeon is home to several species of dragon (red, bronze, iron and steel), as well as several other monsters, such as black demons. North-west of Brimhaven is Moss Giant Island, home to 5 moss giants.

There is a player-owned house portal which players can House Teleport to if their house is in Brimhaven, there is a range in one of the nearby houses and the Fisher Realm may be found here by blowing a magic whistle under the tower located on the north-western peninsula. There is an obelisk to the north-west of the town and the Black Arm Gang's second hideout can be accessed in the middle of the city during and after Heroes' Quest. The hideout contains some pirate guards and a small treasury with some coins and the 2 candlesticks needed to continue the quest.

Davon's Amulet Store can be found on the south-eastern part of the town. Davon runs the store, and players can sell several enchanted amulets and holy symbols to him.

The Dead Man's Chest is a bar from which players can buy beer. It is located to the west of Davon's Amulet Store. The bar is one of the locations you need to go to for the Bar Crawl miniquest. There is also a bronze hatchet spawn in the bar which can be useful for chopping vines in the Brimhaven dungeon.

The Shrimp and Parrot[edit | edit source]

Main article: The Shrimp and Parrot

The Shrimp and Parrot is a restaurant, or food shop run by Alfonse the waiter and Charlie the cook. Players can buy limited quantities of cooked herring, cod, tuna, lobster, swordfish, and karambwan here.