Song from the Depths

Song from the Depths is the 182nd quest released in RuneScape. It takes place around Rimmington, where the men of the village have been afflicted with a sleeping sickness and the current hero, the mysterious Raptor, is too brutal and reckless to be depended upon. It is a novice level quest with no requirements and is the third fully voiced quest, after One Piercing Note and Let Them Eat Pie. The town of Rimmington received a graphical update with the quest's release.

The quest is a prelude to the Queen Black Dragon, who was released one week later.

The men of Rimmington have entered a deep sleep. Lucille – the wife of one of the men – has noticed that they all seem to be having the same dream. What the men call out from their slumber doesn't make much sense at all; talk of wending through woods and cricket legs.

Out of desperation Lucille has sent the Raptor to help her husband, but she fears the outcome may be a similar, if not more permanent fate.

Help Lucille save her husband from his dreams, and from the Raptor.

Begin by speaking to Lucille, whom you'll find in the house west of the Rimmington well. She will be trying to wake up some men, who are apparently muttering about the same things and cannot be woken from their sleep. One of these men is her husband, Waylan.

Offer your help and she'll accept, but also mentions that the "Raptor" came earlier to offer help. Lucille gave the Raptor a Restless Sleep potion that allows one to enter the dream world, which the Raptor readily took and drank. Lucille requests that you do the same, as the Raptor's methods of problem solving are not exactly safe and measured and she is quite afraid of him. 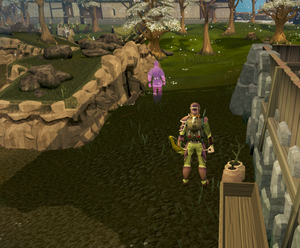 Following Waylan's soul into the cave

Lucille will now give you a Restless sleep potion. Drink it and you will enter a dreamlike, foggy state – your screen will change somewhat, but you'll still be in Rimmington. Be aware that wandering too far from the quest area will wake you up and you'll have to head back to Lucille for another potion.

Leave the house and you'll see souls of men walking away. Follow them north and then east to a cave entrance. Enter the cave.

Continue over the bridge in the cave. A Haunting Voice will begin recounting a tale to you, followed by the growl of the Raptor. After the story, continue through the cave to find an irritable Raptor, who claims that it's too late to save Waylan, and that the player cannot stop him. The Haunting Voice will call for the men to hear her story, to which the Raptor obliges and goes after her. Follow him through the door.

You'll now find yourself in a maze. The Haunting Voice will help you find your way by singing, or you can just follow the souls into the right entrance. Follow the hints to proceed: Head through the north then through the west doors. Now south, then east. If you go through the wrong way often enough, you'll find dreaming souls walking through the correct pathways.

Once you're through the maze, follow the dreaming souls through another door to a cutscene in which the souls will walk through a doorway that disappears.

Symbols on the floor[edit | edit source]

A percentage bar will be shown at the top of your screen; you must make it reach 100% for the door to open. To do this, you'll have to find two more symbols that look like the one you stepped on during the cutscene:

An illuminating symbol after it is found

A doorway will form in a random corner of the room, (it's different for everyone) . Enter it and you'll have to find three more symbols:

With every symbol you find, the Voice will tell you a little more of the story. Another doorway will appear in a random corner; enter it. 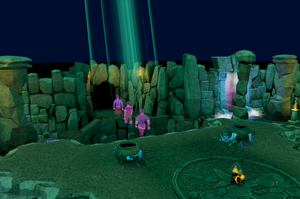 The souls head into another doorway.

Follow the dreaming souls through another doorway. You will enter a room through a cutscene with four elemental pots and a sapling. The haunting voice will help you – the main idea is to nurse the burning sapling back into a healthy tree:

If you step through the incorrect doorway or placed the sapling incorrectly (or both), then you will be prompted upon entry to return to the previous room to retry the step. You can also leave the room, which will reset the progress to the most correct one to try again. 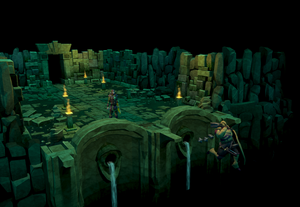 The jump into the chasm

Now go north and enter the doorway. A cutscene will ensue where the dreaming souls fall down a chasm, and the Raptor follows. Follow them and you'll be eaten by the Queen Black Dragon.

Remora, trapped inside the cyst 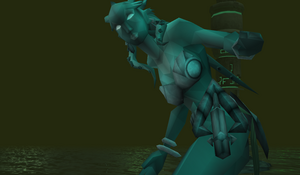 Inside, follow the chasms through several openings. Be careful not to step into the green acid since it will cause periodic damage. There are also several level 1 grotworms and flying leeches, however they are not aggressive.

Eventually you will find the Siren, imprisoned in a sac and placed under the illusion that she is still on her island where singing would not lure men to their death. Go through the interactive cutscene. The dragon that ate you has apparently tricked her into singing others' souls towards her. At first she won't believe the player who said they are in the belly of a dragon, but she sings a song of awakening in an attempt to make the player see the reality – but it instead frees the souls and herself from the illusion. She offers to help you escape if you free her. However, a cutscene shows the Raptor enter, who intends to kill the Siren. Luckily, however, talking to him allows you to dissuade him from killing her by the fact that he can't escape without her aid.

Now you will grab the coral crossbow on the floor and burst the cyst (no ammo is required), causing the dragon to vomit the three of you out. Remora, the Siren, will find her necklace, but will be promptly burned to death by the dragon. While the Raptor's shield protects you, you grab the necklace, and both you and the Raptor will teleport out to safety.

The Raptor will say that you should go tell Lucille about the events while he goes off to kill the dragon. He'll give you Remora's necklace, a Coral crossbow, and 50 Coral bolts before sending you off. Head southwest to Rimmington and report to Lucille. 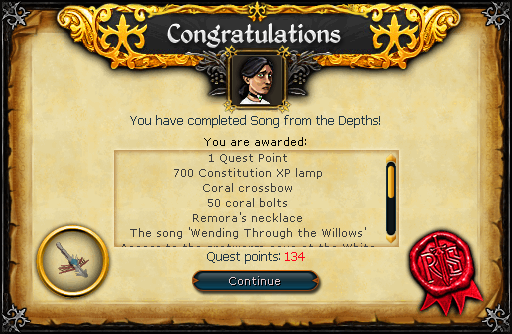 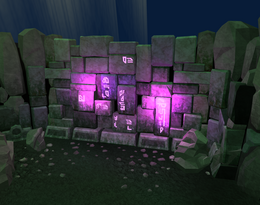 One of the walls with ancient writings

Song from the Depths is not currently required for any quests or miniquests.