The black spear is a two handed melee weapon. It requires an attack level of 25 to wield.

It is a possible reward from looting a chest in the shade catacombs of Mort'ton while participating in the Shades of Mort'ton minigame.

As with all black equipment, this item cannot be made using the Smithing skill. 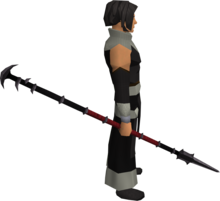