During In Aid of the Myreque, it is learned that this weapon was used by the legendary Saradominist Ivandis Seergaze, who helped in an assault against Lord Drakan. The original rod, wielded by Ivandis Seergaze himself, can be found sealed onto the lid of his coffin. 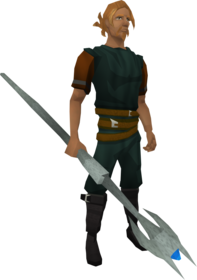 To create the Rod of Ivandis, players must first use soft clay on the tomb found in the cave behind the Canifis bar, which is in the first cave entrance beyond the wall. This makes the mould. Then, players must acquire a sapphire, a mithril bar, and a silver bar, and craft them together in any furnace, granting 55 Crafting experience. The resulting item will be a silvthril rod, which must be enchanted with Lvl-1 Enchant, and then dipped into the well within Paterdomus with a rope.