The leaf-bladed spear can be bought from any Slayer Master for 31,000 coins. It is used to kill turoths and kurasks as an alternative to Slayer Dart, a leaf-bladed sword, broad arrows and broad-tipped bolts. Level 55 Slayer and level 50 Attack are needed to wield the spear. It has similar stats to the rune spear, but strikes quicker, making its damage closer to a tier 60 weapon, while retaining tier 50 accuracy. 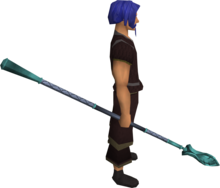